Bigger Isn't Always Better When It Comes to Submarines 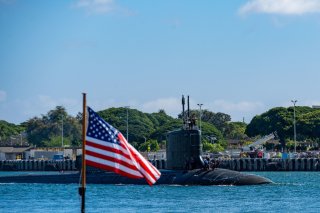 Here's What You Need to Remember: Pair wolf packs of new, small subs with huge flotillas of underwater robots and the Navy could seriously complicate China’s ambitions in the western Pacific.

The U.S. Navy already is beginning to plan for its next class of attack submarine, a high-tech -- and potentially very expensive -- new vessel to succeed the Virginia-class boats that the sailing branch currently is buying.

The new SSN(X), which could begin production in the early 2030s, should be something radically new and not a mere upgrade of an existing submarine, James Holmes argued.

Holmes, a frequent contributor to The National Interest, is a professor at the U.S. Naval War College in Rhode Island. He argued that the submarine the Navy might need in the 2030s and beyond won’t necessarily look like the submarine the fleet needs in 2019.

The new boat perhaps should be smaller. It maybe should work closely with unmanned vessels. It might not even need to be nuclear-powered. For the Navy, buying a diesel-electric submarine rather that a nuclear vessel would shatter decades of tradition and open up new strategies and tactics.

“Sea power is undergoing a phase change with the inception of ultra-long-range precision weaponry, unmanned aerial, surface and subsurface vehicles of many types, land forces able to strike out to sea and on and on,” Holmes wrote. “Submarine warfare is not exempt from this incipient revolution.”

There also are four old Ohios that the Navy converted into cruise-missile carriers during the early 2000s, and which the sailing branch plans to replace with a new “large payload submarine” beginning in the 2030s.

The balance of today's submarines include 35 1980s-vintage Los Angeles-class attack submarines, three attack boats of the 1990s Seawolf class and 13 newer Virginia-class attack boats. As of 2017, the Navy planned to upgrade the Virginia design and continue buying vessels of that class though the late 2040s, at least.

But the 2019 edition of the Navy's 30-year shipbuilding plan revises those plans. Instead of upgrading the Virginia, the sailing branch anticipates designing a brand-new attack boat it calls the SSN(X). The new vessel would enter service beginning in 2034, replacing the Seawolfs and older Virginias. The last Los Angeles-class boats by then should be at the breakers.

That might be the wrong approach, Holmes argued. “It’s natural to improve on what works. SSNs like the Virginia and Seawolf are proven designs, and they are Swiss Army knives, so SSN(X) designers will incline to improve on them by increments. Instead, the silent service ought to fit its new boat to U.S. maritime strategy and, in particular, to the operational environment.”

It’s worth fabricating the SSN(X) for the theaters where national and military strategy say it’s destined to operate, namely the “marginal seas” that wash against the Eurasian “rimlands.” In other words, build the sub to command the waters Washington wants to command.

Suppose, for example, U.S. military strategy envisions “tightening the chain”—closing Asia’s first island chain to maritime movement—to deter and apply pressure on China. American and allied submarines will spearhead such a strategy. What better platform than a torpedo- and missile-armed sub to lurk along the island chain, denying passage to Chinese surface and subsurface shipping?

Maybe an island-chain submarine could be a smaller submarine—smaller than the Virginia class, let alone the Seawolf. Or maybe the new design could come in diesel-electric as well as nuclear-powered variants to hold down the expense. After all, a boat stationed in Japan or The Philippines need not remain underwater virtually forever, as a nuclear sub can, in order to patrol a strait. It can get by with shorter on-station times.

Some navies install different propulsion plants in the same hull form. American yards could doubtless follow suit if the customer so directed. The question of whether the submarine force must remain all-nuclear is worth asking—and taking seriously.”

Buying smaller and non-nuclear submarines could have a secondary benefit. They likely would be cheaper than the bigger, nuclear-powered boats are.

If the Navy could conceptualize strategies and tactics that take advantage of smaller, conventional submarines, it could chart a path through its declining undersea force structure. It could buy a diesel-electric submarine for a fraction of the cost of a nuke, allowing it quickly to build up a bigger undersea fleet.

Pair wolf packs of new, small subs with huge flotillas of underwater robots and the Navy could seriously complicate China’s ambitions in the western Pacific.

“Framers of the SSN(X) program should gaze darkly into the future, then, asking themselves whether the ‘sub’ remains the sole bearer of undersea might or they should design the undersea fleet to accommodate new realities,” Holms wrote. “SSNs that operate in concert with unmanned craft could be quite different from the lone wolves that now prowl the oceans and seas.”

David Axe served as Defense Editor of the National Interest. He is the author of the graphic novels War Fix, War Is Boring and Machete Squad. This first appeared in 2019 and is being reposted due to reader interest.