This Is the Biggest Battleship Ever Built. It Was Almost Impossible to Sink. 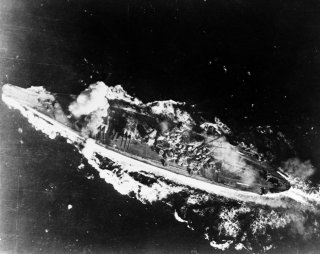 Key Point: Tokyo built one of the biggest ships ever to exist. It was deadly, but too lumbering to stand against a massive air assault.Japan withdrew from the London Naval Treaty in 1936. The chief Japanese negotiator, Adm. Isoroku Yamamoto, feared that concessions on the part of his negotiating team would lead directly to his assassination upon return to Japan. Japanese nationalists believed that the Washington Naval Treaty system was holding Japan back and preventing it from becoming a first-rate power. Freed from the constraints of international treaties, they believed that Japan could build a world-beating fleet that would push the Western powers out of Asia and help usher in a new era of Japanese dominance.

Musashi was the second ship of the Yamato class, the first of this new generation of battleships. The Imperial Japanese Navy believed that the United States would never build battleships too large to move through the Panama Canal, and calculated that the maximum displacement of such ships would amount to about sixty thousand tons. Ships of that size could not, it was thought, carry guns larger than sixteen inches. The IJN’s engineering problem was thus to design and build battleships that could destroy the largest ships the Americans were likely to build. The Japanese ships were to have a speed of at least thirty knots, carry eighteen-inch or larger guns, and have a long range with good fuel economy. With three triple 18.1-inch gun turrets, the Yamato class met one of the three conditions. Initially designed with diesel engines for economical cruising, problems with the diesels led to the use of a standard, fuel-intensive power plant. A well-armored thirty-one-knot version was rejected as too large (the Yamatos displaced sixty-five thousand tons), and the IJN unwisely decided to sacrifice speed for armor, settling on twenty-seven knots. As it was, its armor weighed more than an entire World War I dreadnought, and could absorb enormous damage. Musashi and its sister were immensely powerful ships, but the sacrifice of operational mobility for surface tactical effectiveness would limit the impact that they would have on the war.The IJN ordered five ships of the Yamato class, but only Musashi and its elder sister were completed as intended. Shinano, the third sister, was completed as an aircraft carrier support vessel. Japan took elaborate precautions to prevent details of the ships’ construction from reaching the United States. Indeed, the United States only acquired good intelligence as to the size and armament of the battleships in 1944. When Japan surrendered, the IJN attempted to destroy all photographic and technical data on Yamato and Musashi, leaving Western analysts guessing as to its exact characteristics well into the Cold War.