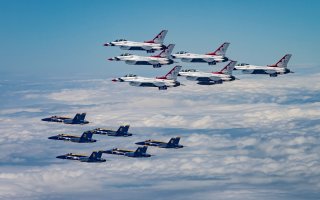 The U.S. Navy Blue Angels and U.S. Air Force Thunderbirds unveiled their new “Super Delta” formation during a joint training session over the Imperial Valley in California on Tuesday. The Blue Angels and Thunderbirds are the two services’ flight demonstration squads, known the world over for their spectacular shows and incredible aircraft control.

“The formation grew out of a series of joint training opportunities held in 2020 and 2021, and serves as a symbol of the teamwork, discipline, and skill of the men and women of our United States military forces deployed around the globe,” read the Blue Angels’ Instagram post.

The “Super Delta” formation consists of six U.S. Navy F/A-18 Super Hornets operated by the Blue Angels flying in their standard delta formation while flanked on either side by six F-16 Fighting Falcons from the Air Force’s Thunderbirds. Three F-16s flank the Delta formation on either side, forming a massive flying wing made up of some of America’s top-tier 4th generation fighters.

This unveiling is of particular import for the Navy’s Blue Angels, who are entering their 75th performance season. 2021 also marks the first year the Blue Angels operate with Super Hornets, as opposed to the team’s previous legacy F/A-18 Hornets.

Over the past year, with many of each team’s performances cut due to Covid, the Thunderbirds and Blue Angels traveled around the country performing complex maneuvers over communities and hospitals struggling to control the spread of the virus. The high-performance jets gave the folks below a small morale boost, while also allowing the pilots to continue honing their skills behind the stick.

However, even amid working together for these morale flights, the two teams have never formed a single formation like the “super delta” before. According to the Thunderbirds Twitter account, the teams plan to unveil this new formation during a nation-wide broadcast of the National Memorial Day Parade later this year.