Blue Carbon Environments Are Key to Stopping Climate Change, But They Need Our Support 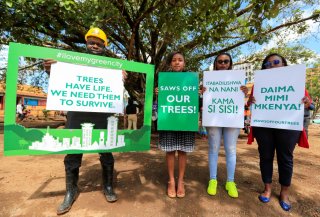 With the election of Joe Biden, the US is set to rejoin the Paris Agreement. The country’s commitment, made in 2015, to restrain temperature rises to 2°C as part of an international effort is again endorsed, at least on paper.

But progress since 2015 has been painfully slow. Signatories to the Paris Agreement must pledge actions, known as “nationally determined contributions” (NDCs), which increase in ambition at each five-year submission. The latest set are due in 2020, but with little time left, many are yet to be published.

It’s hoped this process will produce public displays of virtue as governments jockey for leadership. But some nations – including Australia, New Zealand, Russia and Indonesia – have already stated they will not increase their ambition during this round of submissions, in violation of the agreement. Global policies currently in place, combined with newly pledged NDCs, give an estimated 66% chance of keeping global temperatures below 2.9°C by the end of the century.

We’re deep in the danger zone. With the broad aspirations of the Paris Agreement confirmed, attention must now focus on rapid implementation. An immediate issue is clarifying article six – the most contentious part of the agreement. It deals with how countries can cooperate through carbon markets, emissions trading and support for less developed nations at international, national and local levels.

It will shape how the world supports nature-based solutions to climate change, which protect and expand natural carbon sinks such as forests. Take blue carbon habitats for example – mangroves, salt marshes and seagrass meadows. 151 countries contain at least one of these natural carbon stores. Stopping their destruction would save half a gigatonne of CO₂ per year – more than the UK’s entire annual emissions.

Conserving these ecosystems will depend on empowering local communities to lead the effort. Kenya exemplifies the opportunities and challenges. The country has 61,271 hectares of mangroves and 31,700 hectares of seagrass, which together store at least 77 million tonnes of carbon, more than 11 times the country’s annual CO₂ emissions. By nurturing the species that local fishers catch, these beautiful habitats provide livelihoods for thousands along the coast and attract visitors from around the world.

Fortunately, Kenya hosts world-leading examples of how carbon trading can support natural solutions to climate change. People and organisations can choose to offset their carbon pollution using a voluntary market, which operates independently of international agreements like Paris.

One project their money can support is Mikoko Pamoja (“mangroves together” in Kiswahili), which protects a mangrove forest in Gazi Bay, southern Kenya. The carbon saved by conserving and expanding these mangroves is independently verified and the money raised pays for tree nurseries, efficient wood stoves and forest patrols which prevent poaching and monitor the health of the forest. It also contributes to a community benefit fund. Decisions regarding how to spend that money – building schools, hospitals or other community projects – are made by the local community.

This kind of small-scale and locally controlled offsetting looks very different to that supported under the old Kyoto Protocol. Under that treaty, carbon trading often funded large-scale green technology and energy projects, but research suggests that up to 85% of these would probably have happened anyway, even without offsetting funds.

Kenya could incorporate the protection and expansion of all its blue carbon ecosystems into the nation’s NDCs, making a high-profile commitment to their conservation. But this won’t happen without new sources of income. Money could come from emissions trading in a newly formed international market, which was originally envisaged in article six. To be successful, this market must allow the lessons learned from small, voluntary projects to be applied nationally. There are three major challenges if this is to work.

First, there is a danger of double counting. If rich countries fund the conservation of blue carbon habitats in Kenya, are these climate benefits included in the Kenyan NDC or in that of the funder? Second, can voluntary market projects contribute to a country’s entire NDC? And if so, how will they retain the flexibility and local control that made them a success? Lastly, and perhaps most importantly, the whole idea of trading carbon is dangerous if it becomes an excuse for inaction. Carbon trading must not allow large polluters to avoid making the urgent cuts in emissions needed.

Setting the rules that govern emissions trading, financing and support for developing countries over 2021 will be critical. These must ensure that investment goes to additional projects – those that would not have happened without support –and that the rights of communities that depend on carbon-rich ecosystems are respected. Nature based solutions, with all their added benefits for wildlife and local wellbeing, should feature prominently. And all parties to the Paris Agreement must commit to and demonstrate immediate reductions in emissions rather than look to offsetting as an excuse for inaction.

The election of President Biden was a step in the right direction. Now we need to start running.