Bombs Away: How an F-15E Took Out An Iraqi Helicopter With a 2,000 Pounder 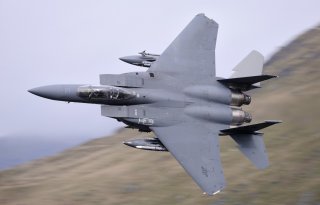 In 1991, Air Force Capt. Tim Bennett was serving as a flight leader for the 335th Tactical Fighter Squadron out of Al Kharj AB in central Saudi Arabia, in support of Operation Desert Storm. He and his F-15E would fly a total of 58 combat missions through the deployment, but one stands out as particularly exceptional: The time Bennett and his weapons officer, Capt. Dan Bakke, managed to shoot down an Iraqi helicopter using a 2,000 pound laser guided bomb.

On Valentine’s Day of 1991, Bennett and Bakke were conducting an early morning Scud combat air patrol — flying around northwest Iraq looking for mobile Scud missile platforms that could pose a threat to American forces. They were flying above the cloud cover, waiting to receive targeting coordinates from a nearby AWAC, when they received a different kind of call: An American Special Forces team had been operating secretly more than 300 miles from the border identifying Scud launchers for engagement, and they’d been discovered by the Iraqi military.

As the AWAC relayed that there were five Iraqi helicopters closing with the Green Beret’s position, Bennett diverted toward the special operators. He and his weapons officer called back in to the AWAC as they spotted the helicopters on their radar, traveling west to east.

“We don’t have any friendlies in the area. Any helicopters you find, you are cleared to shoot,” Bennett was told over the radio.

As Bennett closed with the helicopters, he and Bakke noticed that they were flying and stopping at regular intervals, and it seemed as though they were dropping off ground troops to continue engaging the Special Forces team. In effect, the helicopter and ground troops were coordinating to herd the American Green Berets into an unwindable engagement.

“By this time, we were screaming over the ground, doing about 600 knots–almost 700 mph. The AAA [Anti-Aircraft Fire] was still coming up pretty thick. Our course took us right over the top of the Iraqi troops to the east of the team. We didn’t know exactly where our team was, but it was looking to us like things were getting pretty hairy for the Special Forces guys,” Bennett later recalled.

Bennett decided to engage the lead helicopter, but not with his Aim-9 Sidewinders which were designed for air-to-air engagements. Instead, he planned to lob a 2,000 pound bomb in its direction. Chances were good, he knew, that it wouldn’t hit the helicopters, but it would kill the troops on the ground and likely startle the Hind pilots, allowing his wingman to get a clear shot with a Sidewinder.

Because they were moving so quickly, the unpowered bomb actually had a greater range than the Sidewinder missile. Bennett released the bomb 4 miles out from the Hind-24 Bakke was carefully keeping his laser sighted on.

“There’s no chance the bomb will get him now,” Bennett thought as the Hind-24 lifted off the ground and began to accelerate.

“I got a good lock with my missile and was about to pickle off a Sidewinder when the bomb flew into my field of view on the targeting IR screen.”

“There was a big flash, and I could see pieces flying in different directions. It blew the helicopter to hell, damn near vaporized it.”

Of course, scoring the F-15E’s first air-to-air victory might be a point of pride for Bennett and Bakke, but they still had a job to do. They moved on to engage a mobile Scud on a nearby launchpad before heading home.

“The Special Forces team got out OK and went back to Central Air Forces headquarters to say thanks and confirm our kill for us. They saw the helicopter go down. When the helos had bugged out, the team moved back to the west and was extracted.”