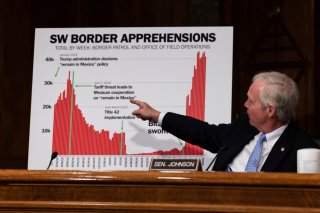 If you wanted to make up something to depict President Joe Biden as the cause of the border crisis, you might invent a scenario in which he was just turning illegal immigrants loose into the interior of the country.

Such a situation might easily be dismissed by skeptics as too much of a caricature of a president criticized by conservatives for lax immigration enforcement.

But it’s actually true, according to new reporting.

Axios this week revealed that “about 50,000 migrants who crossed the southern border illegally have now been released in the United States without a court date.”

The report indicates that it is “unprecedented” for border agents to set illegal immigrants free without giving them official notice to appear in court.

Instead, they have been provided with lists of Immigration and Customs Enforcement offices and advised to report to one of them.

Axios reports that it is the Biden administration’s “hope” that the illegal immigrants will show up.

That wishful strategy has been an abject failure so far, as just 13% have presented themselves at an ICE location. There’s no reason to have confidence that the administration has the foggiest notion of where the rest of them are.

Biden’s reckless policy has turned “catch and release” into “catch and misplace.”

The revelation comes amid repeated record-setting in the numbers of people attempting to illegally cross the southern border.

More than 1 million arrests have been made involving people trying to cross the U.S.-Mexico border since last October. The last time we saw that many stops in one year was 15 years ago, and there are still two months left in the current fiscal year.

Further, the 178,000 arrests made in June alone marked a 20-year high for the month. That follows other, similar monthly records being broken.

All of this puts the lie to Biden’s claims that the surge at the border is something that happens “every single, solitary year.”

The fact is that Biden campaigned for president promising an array of enticements for people to break our laws to enter this country. He promised amnesty for those already here, taxpayer-provided health care, work permits, support for sanctuary cities, and a cessation of deportations.

Since becoming president, he also paused construction of the border wall and reversed the “Remain in Mexico” policy, which delayed entry for those seeking asylum.

If a surge of this nature occurs every year, or is Trump’s fault, as the Biden administration wants us to believe, then why have so many people amassed at the border wearing Biden-themed T-shirts?

Translated: “Thanks to President Biden for the opportunity to come here now.”

The news about unaccompanied minors arriving at the border is no better.

True, the number of children stopped at the border in June represented a decrease from April and May, but the June figure “remains higher than any other month recorded of any other year,” according to Axios.

Additionally, at a time when Biden’s administration has returned to recommending mask-wearing to prevent the spread of the coronavirus, this permissive immigration policy seems especially dangerous to public health.

Fox News reported earlier this month that 30% of illegal immigrants in ICE custody have refused to receive a COVID-19 vaccine. That, of course, does not even begin to address the vaccination status of those released without court dates or those who have disappeared inside the country.

All of this is laid at the feet of Biden, whose administration infamously refused to call the scene at the border a “crisis,” even though it most certainly and obviously is one.

And though they are sometimes forced to cover the raw numbers, some in the media cannot resist offering Biden some protection from this reality. For example, The Associated Press has instructed its staff to avoid using the word “crisis” to describe the situation at the border.

So, the observation holds true: If you were going to envision immigration policy that was exactly wrong, what Biden is doing would be it.

But you don’t have to imagine it, because it’s reality, and it’s no accident. It’s what he promised he would do.

Tim Murtaugh is a visiting fellow at The Heritage Foundation and contributor to The Daily Signal. He is the former communications director of President Donald Trump’s 2020 reelection campaign.

This article is republished from The Daily Signal. Read the original article.