Bouncing Off Bullets: One French Tank Took on Nazi Germany 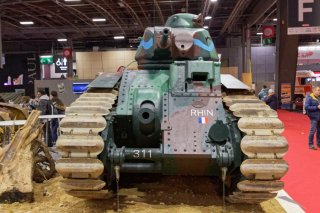 Rommel then called in artillery and dive-bomber strikes on the hill. His Panzer IVs had exhausted their 75-millimeter shells to little effect on the B1s’ heavy armor.

Around noon, the 37th BCC dispatched its 2nd company to roll to the assistance of the 28th, but fuel shortages and mechanical breakdowns reduced the unit to only five running tanks when they were ambushed by anti-tank guns and 30 Panzer IIIs and IVs hiding in the Biere l’Abbé woods. The vastly outnumbered heavy tanks took out 15 Panzers, but three B1s succumbed to the sheer weight of incoming fire. The remaining Guynemere, Ourcq and Isere retreated, heavily damaged.

The other two companies of the 28th began to withdraw. While the 1st company got out cleanly, the 3rd bumped into a battalion of powerful 88-millimeter Flak guns and 105-millimeter howitzers near Denée. After losing all but seven of his B1s, Lehoux ordered his company to charge, even though he lacked infantry and artillery support. The heavy guns wiped out the French tanks—but not before the French crushed several 37-millimeter guns under their treads, and destroyed eight of the German flak and field pieces with direct fire.

Back at Flavion, the 37th BCC single-handedly continued to hold up an entire Panzer division. Growing desperate, Rommel deployed 88-millimeter flak guns a kilometer away. These begin picking off the fuel-starved French tanks, which could barely move to fire back with their hull-mounted howitzers. A final charge by the Panzers caused the signal to retreat to be sounded at 6:00 P.M. Between the lack of fuel, mechanical breakdowns and enemy fire, only three of the battalion’s B1s escaped.

Though a battalion and a half of French tanks had knocked out roughly 100 Panzers, a failure to support their actions with artillery, infantry and air support meant the tankers’ sacrifice had been in vain.

Char B1s continued to see action into June 1940, frustrating German efforts at the local level. In five days, three B1s defending the bridges at Rethel knocked out 20 German tanks, nine armored cars and 38 motor vehicles. Legendary general Heinz Guderian even notes the hassle a lone Char B1 caused in his memoir Panzer Leader: “All the shells I fired at it simply bounced harmlessly off its thick armor. … As a result, we inevitably suffered sadly heavy casualties.”

But such actions could not shift the overwhelming tide of events.

The lumbering Char B1 didn’t really suit the Heer’s style of high-speed armored warfare. However, a victorious Germany decided to employ more than 161 captured Char B1s, overhauled and designated Panzerkampfwagen B2 740(f), in more static roles. Some were used in the invasion of Russia. Others fought huge partisan armies in the Balkans. Panzer Battalion 213 was even deployed to the Channels Islands that Germany captured from England.

Under personal consultation of Hitler, the German military and tank manufactures tinkered with the French tanks. Sixty B1s had their hull-mounted howitzers replaced with flamethrowers on flexible mounts. These first saw action in the 102nd Flame-tank Battalion as part of Operation Barbarossa, assaulting Soviet border fortifications in Western Ukraine on June 1941.

Two of the tanks were knocked out, however, and the unit suffered so many breakdowns that it was withdrawn from action in July. The Germans busily went about redesigning the flame tanks, and deployed an upgraded design in the 223rd Captured Tank Company to the siege of Sevastopol in the summer of 1942, again with little success.

Another 16 B1s had their turret ripped off, and replaced with 105-millimeter howitzers enclosed with an armored cab to serve as self-propelled artillery. These served in the 93rd Artillery Regiment in the garrisons of occupied France and then Sardinia.

In June 1944, American and British troops encountered B1s in Cherbourg during the battle of Normandy, then again in Arnhem and Oosterbeek in Holland during Operation Market Garden. By this late stage in the war, Sherman tanks and bazookas easily outgunned the early war design. Still, the B1 could still dish out quite a bit of anti-personnel firepower and the Germans still had 40 in service entering 1945.

French resistance fighters managed to get their hands on a handful of the abandoned heavy tanks and used them in the liberation of Paris. While the front-line units of the Free French Army under DeGaulle primarily used U.S. armor such as M10 tank destroyers, they still rounded up 19 Char B1s they found in Renault factories and assigned them to 2nd Squadron of the 13th Dragoon Regiment.

The Dragoons were dispatched to assist in the siege of the last fortified pockets of German forces in Royan and La Rochelle. Facing limited anti-tank defenses, the Free French Chars blasted German pillboxes in Saint-George de Didonne, which surrendered on April 1945, and then besieged the German garrison at La Rochelle. The French heavy tanks were finally retired in 1946.

A final two Char B1s were modified as minesweepers in April 1945. They contributed to cleaning up the terrible mess of a war, that for all their formerly impermeable armor, they could not win by themselves.

This article by Sebastien Roblin first appeared at War Is Boring in 2017 and is being republished for reader interest.