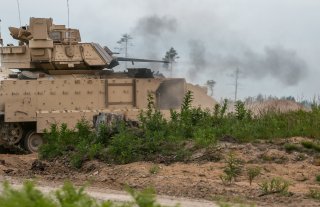 Here's What You Need to Remember: The Bradley vehicle served decently despite a very controversial development history. A firepower upgrade could be coming soon.

Jane’s Information Group, an open-source intelligence company, reported that Northrop Grumman delivered several prototype guns to the U.S. Army for their Bradley replacement vehicle—and what they delivered looks like a beast.

Previous photos released by Northrop Grumman show the XM913 50mm cannon outdoors, silhouetted against the sky. The massive 50mm main gun is said to have two types of ammunition, a fin-stabilized armor-piercing sabot round, as well as a high explosive tracer round. To offset some of the no doubt massive recoil the massive gun would generate, the XM913’s barrel features a prominent four-baffle muzzle brake—though a quick google search shows that the main gun still has lots of recoils.

A Northrop Grumman spokesman told Jane’s that the 50mm cannon “combines Bushmaster chain gun reliability with [a] next-generation effective range that will provide the warfighter with increased stand-off against near-peer adversaries,” though what platform the massive main gun will be mated to remained slightly ambiguous.

The Army is in the middle of a modernization push and is introducing several new armored platforms into service. One of these, the Armored Multi-Purpose Vehicle manufactured by BAE Systems, recently entered serial production.