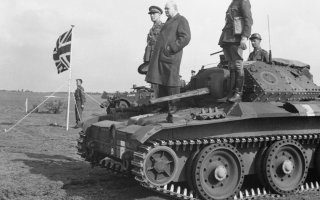 Here's What You Need to Know: Looks don't always kill.

Tanks should be fast, powerful, robust—everything the Covenanter tank was not.

In 1938 and 1939, it became increasingly apparent to both the British military and to the world that a major European war was imminent. As a stop-gap measure, the Covenanter tank was built in large numbers, despite the fact the design was not fully mature—but was in actuality still being drawn up—and so had not been extensively tested in the field.

Initial designs called for one coaxial machine gun, a 40-millimeter main gun, and armor that was 30-millimeter standard. Importantly, this did not mean the armor actually had to be 30 millimeters thick. Thinner armor would be accepted as long as it was sloped, and therefore considered equivalently resistant to enemy shots as 30-millimeter unsloped armor.

Many sloped surfaces were incorporated into the design to keep weight at a minimum. The turret was extensively sloped, and to its detriment had dual “shot traps” on either side, in which glancing shots could potentially ricochet downwards and into the tank’s hull, knocking it out.

Due to a shortage of qualified steel welders, the tank opted for an older riveted design, in which steel armor plating is stamped together rather than being welded. This heavier design, combined with all-steel road wheels, instead of lighter aluminum ones, pushed the Covenanter tank’s weight to the breaking point. Production models strained suspension to the maximum, and further modifications or improvements had to be the same weight or lighter.

Despite Covenanter tank small size and squat stature, there was just enough room inside for four tankers—driver, gunner, loader, and commander, though it was not at all comfortable.

The engine was abysmal. Though the thin armor had achieved some weight savings, the engine had a paltry 340 horsepower output. Not only was the tank dangerously underpowered, but the engine also didn’t fit entirely inside the tank. The 12-cylinder engine’s radiators poked out from the tank’s body, exposed to enemy fire which would have crippled the little tank. Its range was similarly bad, and maxed out at around 100 miles, or approximately 160 kilometers.

Though exposed to the air, the radiators did not perform well. The tank suffered from cooling problems and was therefore not sent abroad for the Allies’ North Africa campaign, but was relegated to home duty. A last-minute transmission change required changing transmission fans for a smaller alternative, which caused the transmission to overheat as well.

Perhaps the only mission the Covenanter tank was capable of was as a bridge-layer, where bridge-laying variants were employed during the siege of Dunkirk.

By 1943, all Covenanter tanks were so underpowered and under-armored when compared to contemporary German designs they were declared obsolete and subsequently scrapped. An ignominious end for the rushed design.