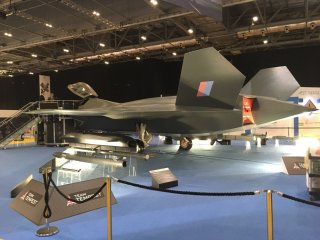 Last December, the Royal Air Force Capabilities Office and the branch’s Team Tempest held a virtual briefing to provide updates regarding their forthcoming 6th generation fighter dubbed “Tempest.” Along with industry updates and discussion about the program’s progress, the UK’s Ministry of Defence also revealed a new artist’s rendering of the new fighter (shown above).

Team Tempest includes a laundry list of defense contractors who are currently working on facets of the forthcoming aircraft, and they’ve made some lofy claims about what this new fighter will be able to do. Industry partners involved in the program include BAE Systems (the aircraft lead), Rolls-Royce, Leonardo, and MBDA.

“We have been a world leader in the combat air sector for a century, with an enviable array of skills and technology, and this Strategy makes clear that we are determined to make sure it stays that way. It shows our allies that we are open to working together to protect the skies in an increasingly threatening future – and this concept model is just a glimpse into what the future could look like,” UK Defence Secretary Gavin Williamson said.

Like the U.S. Air Force’s Next Generation Air Dominance program (NGAD), the Tempest aims to leapfrog the capabilities offered by the world’s most advanced fighter jets in operation today–5th generation fighters like the F-35, F-22, J-20, and Su-57. However, the leap from the 5th to 6th generation is more about marketing than it is about function. Generational designations are effectively just industry shorthand to describe the design and production process that went into a platform.

While there are no formal requirements for the informal title of “6th generation” fighter, there are a number of assumptions defense experts have made regarding the capabilities such a jet would need to bring to the table. You can read a more thorough breakdown of those capabilities in our analysis of the 6th generation of fighters here. In the interest of brevity, some anticipated capabilities include the use of artificial intelligence to assist the pilot, the ability to manage drones in support of the fighter, and all the advancements that came along in the 5th generation, including stealth and data fusion.

According to this graphic created by BAE Systems, the Tempest promises to meet each of those requirements.

“Tempest is one of the UK’s most ambitious technological endeavours and designed to deliver a highly advanced, adaptable combat air system to come into service from the mid-2030s. This next generation combat aircraft, which forms part of a wider combat air system, will exploit new technologies as they evolve to respond to the changing nature of the battlespace, addressing increasingly high-tech and complex threats and conflict.”

In order to build upon the data fusion success of flying supercomputers like the F-35, Tempest’s project lead for electronics and avionics Leonardo has been developing a new Multi-Function Radar Frequency System specifically for the new fighter.

This system will leverage massive amounts of computing power to collect and process a claimed 10,000 times the data of existing radar systems. As Leonardo puts it, the Tempest will be able to gather and process the “equivalent to the internet traffic of a large city every second,” offering its pilot a positively unmatched degree of situational awareness. If the F-35 is considered a “quarterback in the sky,” Leonardo hopes to make the Tempest into an offensive coordinator.

In keeping with that breadth of awareness, BAE aims to create what would effectively be a virtual cockpit pilots will use in conjunction with a similar augmented reality interface to that of the F-35. Pilots would be able to customize every facet of the cockpit around them, using digital switches that can be rapidly re-mapped to serve different roles. The helmet interface and heads up display would allow the pilot to place the information they need where they can use it most.

Not to be outdone, Rolls Royce is working on a new propulsion system that will burn hotter than previous engines. These new engines are expected to be more efficient and powerful that past iterations, creating the significant power spurless Tempest will need to leverage directed energy weapons that are likely to come. The aircraft’s heat dissipation will also be manageable, according to BAE, so pilots can prioritize capability over stealth, or vice versa.

And like the U.S. Air Force’s Skyborg program, Australia and Boeing’s Loyal Wingman, or Russia’s recent efforts to pair their Su-57 with the Hunter UCAV, the Tempest will be designed to operate with its own flock of drones. These drones will extend the Tempest’s sensor reach, engage targets on the pilot’s behalf, and potentially even sacrifice themselves to save the crewed aircraft from inbound attack.

All that is to say that the Tempest has made some big promises, though arguably no bigger than those of the U.S., China, or Russia’s 6th generation fight programs. The question will really be, who will be able to deliver these new capabilities first, and ultimately, who will do it best?