Buckle Up for the Hypersonic Showdown of 2022 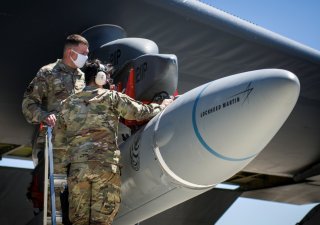 Here’s What You Need to Remember: As a boost-glide weapon, the ARRW skips off the upper boundaries of the earth’s atmosphere before using its speed of descent to propel itself down onto a target. The Air Force’s decision to buy twelve of them suggests that the weapon is fast reaching new levels of maturity as it progresses toward operational service.

The Air Force is working on arming an upgraded variant of the B-52 Stratofortress, a development known as the AMG-183 Air-Launched Rapid Response Weapon (ARRW), and could be ready to deploy an armed bomber as soon as 2022. This would make it the first military service to use a hypersonic weapon—a development that introduces a paradigm-changing air attack possibility.

The boost-glide hypersonic weapon will be able to hit targets at five times the speed of sound to war. The Air Force may have as many as twelve of them in 2022.

The range and speed of an ARRW could allow the B-52 Stratofortress to target and destroy enemy air defenses without ever being within striking range. This situation opens up new attack options for large, non-stealthy aircraft. Currently, the bulky B-52 Stratofortress is capable of conducting stand-in strikes, which require it to be in proximity to its target. But once it is armed with an ARRW hypersonic missile, then it could perform stand-off tactical options, which are contingent upon long-range missiles from afar. Additionally, the aircraft could possibly even function as a flying command and control node.

As a boost-glide weapon, the ARRW skips off the upper boundaries of the earth’s atmosphere before using its speed of descent to propel itself down onto a target. The Air Force’s decision to buy twelve of them suggests that the weapon is fast reaching new levels of maturity as it progresses toward operational service. This would indicate that weapons developers have managed to address some of the central challenges associated with a successful hypersonic flight.

After it is outfitted with the ARRW, the B-52 Stratofortress may possess the unprecedented ability to “soften up” or destroy enemy air defenses, which would have an impact on the Air Force decision to send fighter jets into hostile territory or to fly above hostile areas armed where adversaries possess advanced air defenses. Typically, military commanders use ship- or submarine-fired Tomahawk cruise missiles, stealth bombers or even long-range land-fired missiles on these air defenses. So in this respect, the ARRW could help the B-52 Stratofortress perform functions typically associated with stealthy bomber aircraft or fifth-generation stealth fighter jets.

The arrival of the ARRW is quite significant given that some people consider the United States to be “number three” in the hypersonic arms race, trailing behind both China and Russia.