Is Building a B-1B Gunship a Possibility? 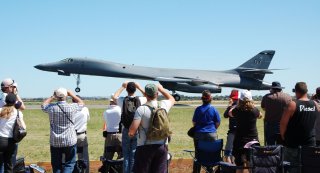 Here's What You Need to Know: In theory, it all sounds well and good, but there are also a number of significant limitations.

In 2018, Boeing filed patents for a number of potential cannon mounting solutions for the supersonic heavy payload bomber, the B-1B Lancer, with the intent of creating a B-1B gunship similar in capability to the famed Spooky AC-130 and its most recent successor, the AC-130J Ghostrider. While the patents indicate Boeing’s interest in prolonging the life of the venerable Lancer, there’s been little progress toward pursuing this unusual design.

Recently, the U.S. Air Force announced plans to begin retiring its fleet of B-1Bs in favor of the forthcoming B-21 Raider, prompting us to ask ourselves: could we actually build a B-1B gunship to keep this legendary aircraft in service?

Could we really build a B-1B Gunship?

Boeing’s patents indicate a number of cannon-mounting methods and even types and sizes of weapons, giving this concept a broad utilitarian appeal. America currently relies on C-130-based gunships that, while able to deliver a massive amount of firepower to a target, max out at less than half the speed that would be achievable in a B-1B gunship. The Lancer’s heavy payload capabilities and large fuel stores would also allow it to both cover a great deal of ground in a hurry, but also loiter over a battlespace, delivering precision munitions and cannon fire managed by a modular weapon control system.

In theory, it all sounds well and good, but there are also a number of significant limitations. The B-1B Lancer’s swing-wing design does allow it to fly more manageable at lower speeds, but it would almost certainly struggle to fly as slowly as an AC-130J can while engaging targets below. Likewise, a B-1B gunship would be just as expensive to operate as it currently is as a bomber–making it a much more expensive solution to a problem one could argue the U.S. has already solved.

But that doesn’t mean we’ll never see this concept, or even these patents, leveraged in some way. If you’d like to learn more about the concept of turning a B-1B into a gunship, you can read our full breakdown (that the video above is based on) here.