Can the Air Force Afford All the Planes it Wants? 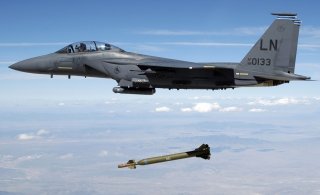 Key Point: The U.S. military faces the same dilemma as any automobile owner: when does it make more sense to buy a new aircraft rather than shelling out more and more dollars to keep the old ones going?

In fact, the operating costs of U.S. aircraft are rising faster than predicted, according to a study by the Congressional Budget Office.

In 2001, the CBO predicted that operating costs would rise by 1 to 3 percent per year. Instead, they found that the price of flying many Air Force planes is soaring by 3 to 7 percent per year.

These unexpectedly high operating costs appear to be somewhat budgetary. "Growth in the total Air Force budget during the 2000s appears to explain a considerable portion of the higher estimated annual growth rates in operating costs per flying hour beyond the growth rate intrinsic to the aging of the fleet," CBO explained. "In other words, because the Air Force had more resources available, it was able to increase spending on aircraft operation and maintenance."

But even after accounting for the larger post-9/11 Air Force budget, CBO still concluded that costs of aging aircraft rose 1.5 to 4.1 percent between 1999 and 2016.

Flying costs of aircraft tend to have three phases. When a plane is new, the initial costs actually decrease as the bugs are worked out and the maintenance system becomes more efficient. In the mid-life phase, costs should be fairly stable. It's in the final years of an aircraft with airframe fatigue and lack of spare parts as manufacturers stop making them, that the price of flying an old plane really starts to soar.

None of this will surprise any owner of a car, or a refrigerator. But there is a deeper problem here.

Americans have become spoiled by the longevity of their military aircraft. The B-52 first took flight in 1952, when Dwight Eisenhower was President and the Korean War was raging. It's still flying. The average age of Air Force aircraft is 27 years.

To some extent, this is inevitable. During World War II, the U.S. and other nations fielded hundreds of new aircraft designs because planes could be obsolete almost as soon as they reached the battlefield. But aircraft then were cheaper and easily mass-produced, so obsolescence was just the cost of doing business.

But with an F-35 stealth fighter costing almost a hundred million dollars apiece, the taxpayer is going to expect that plane to keep flying for decades. Fortunately, the technological aspect to modern warfare means that even an old plane can be upgraded with new missiles and electronics.

Nonetheless, whether an F-22 or your local Ford or Chevy, age takes its toll.