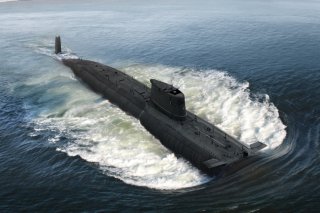 Vice Admiral William Joseph Houston is a thoughtful and experienced United States naval officer, entrusted with command of perhaps the most potent US capability: its submarine fleet.

Houston is also steeped in the history of the US submarine service, and the outsized role it played in defeating Japan in World War II. Following the attack on Pearl Harbor, the only viable weapon immediately available was the US submarine force. In fact, USS Gudgeon commenced the US fleet’s first offensive patrol just four days after the attack of 7 December 1941.

By the time the war had ended, US submarines had sunk more than 30% of Japan’s navy (including eight aircraft carriers) and more than 60% of Japan’s merchant marine fleet.

Not surprising, then, that Houston is fond of describing his submarines as ‘apex predators’ that fear ‘nothing above the sea, nothing on the sea, and nothing under the sea’.

Which is why Australia wants the best possible submarines, too. Nuclear-propelled boats would give Australia the same ‘stealthy, full-spectrum expeditionary platform’ that the US Navy has—minus the nuclear weapons, of course.

But Houston has a problem on his hands: while the number and size of submarines planned for the US Navy continues to grow, the size of the workforce needed to build those submarines has shrunk in real terms.

Events of the past week have highlighted the risk that, regardless of the strongly stated political and military support for AUKUS, members of Congress could begin to take a more ambivalent view if it comes at the expense of US operational readiness.

The leak of a letter that the chairman of the Senate armed services committee, Jack Reed, and then-ranking Republican member James Inhofe wrote to President Joe Biden showed that the senators held concerns that the AUKUS plan to sell or transfer Virginia-class submarines to Australia would undermine the US Navy’s own requirements.

The letter highlights the risk of key US policymakers concluding that nuclear-powered submarines for Australia are a great idea, just not right now. Not while the US is simultaneously planning for war with China.

At the heart of the problem is this simple fact: according to current projections, the US needs to turn out two submarines a year, but only around 1.3 per year are coming out of its shipyards.

The deficit in shipyard capacity is a problem that affects maintenance and refits as well as new boat construction. Last year, Rear Admiral Doug Perry, director of undersea warfare requirements in the US Navy, admitted that of America’s 50 attack submarines, ‘18 were either in maintenance or waiting to go in maintenance’. That figure should be closer to 10.

In the words of senators Reed and Inhofe, ‘what was initially touted as a ‘do no harm’ opportunity to support Australia and the United Kingdom and build long-term competitive advantages for the US and its Pacific allies, may be turning into a zero-sum game for scarce, highly advanced US SSNs’.

Reed and Inhofe will have been briefed in detail by US officials, and presumably those classified briefings led them to conclude that the projected additional demand from the AUKUS program would come at the expense of America’s own military preparedness.

The senators added that they ‘recognise the strategic value of having one of our closest allies operating a world-class navy’. Indeed, Reed subsequently tweeted that he is ‘proud to support AUKUS’, noting that America’s advantage over China is ‘our network of partners and allies’.

Or as one senior US government official privately stated: ‘China hates AUKUS, which means we should love AUKUS—and I love AUKUS!’

Further support arrived in the form of an open bipartisan letter to Biden from nine members of Congress calling for expanding the industrial base, and noting that ‘far from a zero-sum game’, AUKUS could be a ‘rising tide that lifts all boats’.

However, the back-and-forth shows that wider congressional commitment could be put under strain if the program comes to be seen as improving Australian capability while stretching the US to breaking point.

Ultimately, the success of the AUKUS submarines program will be determined not by expressions of political support, but by the ability of an integrated defence industrial base in the US and Australia.

It will take some difficult, even unpalatable decisions: more money, certainly, in the form of government support. But likely also a larger, deeper, better-skilled workforce that will need to start being trained almost immediately, and possibly a workforce that poaches talent overseas from countries that themselves face capacity constraints.

All that plus a fundamental rethink of the way governments and the private sector integrate on long-term advanced technology projects. Add to that the need for a concerted effort to overcome institutional and policy barriers such as the labyrinthine US export controls regime, and the way forward will be anything but easy.

The alternative for Washington, however, is a less capable ally in its primary area of strategic competition. At a time when it is widely accepted by governments in Washington, London and Canberra that the US cannot be expected to carry the burdens of strategic deterrence alone, AUKUS is worth the investment.

Mark Watson is director of ASPI Washington, DC. A version of this article was published in the Australian Financial Review.

This article was published by the Australian Strategic Policy Institute.