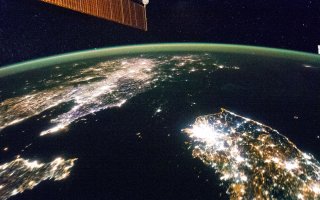 Here's What You Need to Know: The vulnerability of U.S. supply chains for critical commodities and products is now well recognized.

The United States is in competition with China on multiple fronts: economics, technology, geography, politics, and military power. A major battleground between the two countries is in the field of information. Both sides are racing to gain an advantage in how they acquire, disseminate and exploit information. One of the most important classes of information is geospatial intelligence (GEOINT) which focuses on geography and human activities. GEOINT is increasingly central to the activities of governments, companies, non-governmental organizations, and militaries. That makes it unbelievably valuable.

That is why nations such as China are seeking to establish domination over the ways GEOINT is collected, processed, and disseminated. If the United States is going to compete successfully against China and other countries trying to get the upper hand in the information domain, it must have a secure GEOINT information supply chain.

GEOINT is derived from a fusion of multi-sensor imagery with other sources of information about physical features or human activities tied to a particular location. Anyone who uses Google Maps or peruses Google Earth is taking advantage of commercially available GEOINT.

GEOINT has created an extremely valuable ecosystem. For example, information on soil conditions and how crops are planted allows experts to predict the size of global yields. This can be worth millions of dollars to commodity traders. It can also allow early warnings of impending famines. Governments and businesses alike can watch how cities evolve, industrial sites are built, and transportation networks are developed. This information can then be used to guide future investments. GEOINT related to natural disasters can inform response activities saving lives, time, and money.

GEOINT is transforming the way the U.S. military operates. Knowing where friendly and hostile forces are, how they are moving and what they are doing can mean the difference between winning and losing a conflict. GEOINT is particularly valuable in the operations of so-called smart weapons. Knowing what targets to strike, where, how and when is a product of detailed information, much of it provided by GEOINT systems.

China, among other nations, understands the value of GEOINT. This is one of the areas of advanced technology, along with others such as advanced computer chips, artificial intelligence, bioengineering and new materials, that it seeks in order to dominate. By controlling sources of supply for basic materials and ingredients as well as components and finished products, China can not only reap untold billions for its economy but potentially threaten the security of the United States.

The vulnerability of U.S. supply chains for critical commodities and products is now well recognized. In many cases, these supply chains trace back to China or to foreign companies that have significant involvement or ownership by Chinese firms. Dependence on foreign sources of supply costs the U.S. economy jobs, revenue and the ability to compete for the next technological advance.

President Joe Biden came into office with an appreciation for the dangers to the United States posed by excessive dependence on foreign supply sources. Within his first few weeks in office, Biden signed an executive order directing the national government to maximize procurement of goods and services from American sources. As the executive order makes clear, this will help domestic businesses compete in strategic industries and help American workers.

“It is the policy of my Administration that the United States Government should, consistent with applicable law, use terms and conditions of Federal financial assistance awards and Federal procurements to maximize the use of goods, products, and materials produced in, and services offered in, the United States,” the executive order states. ”The United States Government should, whenever possible, procure goods, products, materials, and services from sources that will help American businesses compete in strategic industries and help America’s workers thrive.”

The strategic supply chain for GEOINT needs to be protected. Foreign companies, but Chinese firms, in particular, are making an aggressive play to dominate the field of commercial GEOINT. A recent study by the MITRE Corporation warned that unless swift action was taken, the United States would lose its ability to control commercial GEOINT supply chains or set relevant standards.

The U.S. government’s growing appetite for GEOINT has caused it to consider contracting services from commercial providers, including non-U.S. companies. Many of these companies are subsidized by their governments, which is why they can offer low prices, undercutting their U.S. competitors. If this process continues, then U.S. companies will inevitably fall behind technologically or be denied government contracts due to higher prices. Once commercial GEOINT is in the hands of foreign firms, particularly Chinese-owned companies, U.S. national security will be imperiled.

The United States must have a secure and trusted GEOINT information supply chain. While it is critical for the U.S. government and military to have access to commercial GEOINT, it must know that the raw images, associated imagery information and fused data are all accurate and complete. Reliance on foreign-owned or influenced companies means that even if the GEOINT is available, it may not be trustworthy. The United States has banned the Pentagon’s acquisition of products from Chinese companies such as ZTE because they are believed to be accessible by the Chinese intelligence service. Acquisition of telecommunications equipment made by Chinese companies such as Huawei was banned by executive order in 2019 because of national security concerns. How will it be any different for commercial GEOINT provided by Chinese companies?

GEOINT is too important to allow the U.S. supply chain that supports it to disappear offshore as in the cases of so many other American industries. The entire supply chain for GEOINT must be in U.S. hands, supported by companies without ties to potential adversaries. The National Geospatial-Intelligence Agency (NGA) cannot enter the market for commercial GEOINT as if it were just another buyer. NGA has a responsibility to ensure that the entire GEOINT information supply chain is secure, and the information being acquired is trustworthy.