Can America Take On Russia and China In the Grey Zone? 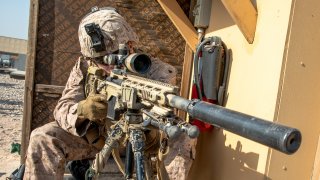 So, in the same way you’ll tolerate sarcastic remarks and sideways glances from the bar’s resident tough-guy, America is forced to tolerate increasingly aggressive acts from bad actor nations. Part of the problem is actually rooted in America’s strength as a nation and the world’s success at avoiding the horror of global war for the past 75 years: It’s just not worth risking World War III over a Russian spy ring infiltrating NATO defense files in Bulgaria.

The unfortunate result is an ever-expanding grey zone that has come to encompass acts as innocuous as public officials’ remarks on Twitter and as nefarious as literal assassinations. In once case, Russian mercenaries who were likely working on behalf of the Russian government even attacked U.S. special operations forces in Syria. When the dust settled, the Russians were soundly defeated by the Americans and their Syrian counterparts, and Moscow claimed to have had nothing to do with it. Yet again, the grey zone grew to swallow up what would normally be seen as a clear act of war.

The more the grey zone grows, the more complex the defense environment becomes. Warfare isn’t always the answer, but with sanctions often failing to have the intended effect, America is left with precious few alternatives but to engage its enemies in kind. Unfortunately, therein lies another challenge. While nations like Russia and China do hold events they refer to as elections, America’s nation-level opponents are largely not beholden to the will of the populous they preside over.

China’s Xi Xinping and Russia’s Vladimir Putin, like North Korea’s Kim Jong Un, have no expiration date on their rule and maintain strict governmental control over all media within their borders. Put simply, the people have very little say in what their governments do, and as a result, the governments can get away with a great deal. In the United States, on the other hand, the American people play an active and vocal role in politics. Often, the American people are the ones to shine a critical light on America’s behavior on foreign soil for the world to see. Americans demand that America play the role of the good guy despite the complexities of the geopolitical world, and while that’s a moral and ethical strength, it can often play out like a strategic weakness in the grey zone.

America’s covert grey zone efforts are the subject of extensive debate and criticisms when revealed, limiting America’s ability to fight on an even footing with more aggressive states that don’t hold public hearings. Again, that’s not an assessment of what’s right or wrong–which is as essential an issue for the American people as it is inconsequential to this discussion–this is an observation about systems of government and how they can create strengths and vulnerabilities under different circumstances.

The truth is, it’s better to live in a democracy where the ethics of warfare can be openly debated, but when we say better, we mean for people, not for the pursuit of strategic goals. A good thing can still be a limiting thing.

The United States has recently pivoted away from the counter-terror operations of the past two decades and back toward near-peer competition with nations like China and Russia, and with this new Cold War of sorts will inevitably come a rapid expansion of the grey zone as it pertains to each. With both nations now fielding their own stealth fighters, developing stealth bombers, deploying hypersonic missile platforms, and expanding ever further into space, America’s technological lead is rapidly diminishing.

As China and Russia continue to approach technological parity, they will grow ever more aggressive in the grey zone, all while remaining diplomatically and politically committed to avoiding war. In fact, it’s likely that China, in particular, will leverage America’s responses to their own grey zone activities as a symptom of America’s aggression, capitalizing on the general public’s lack of understanding or simple disinterest in the nuanced world of covert operations.

In order to counter this seemingly inevitable erosion of America’s defensive positioning, the United States has to find a way to pose a sub-existential threat to its opponents, without compromising the moral and ethical framework established by its people. This covert or diplomatic tool will have to be threatening, but not so threatening that it breaches the barrier into overt acts of war. This tool will need to offer the same or similar results every time, as opposed to the diminishing returns of economic sanctions, and perhaps most importantly, it needs to seem humane when compared to kinetic options.

America needs a new weapon to compete in the grey zone in the 21st century, and it needs one soon.