Can Anyone Stop the Narco-Terrorist Taliban? 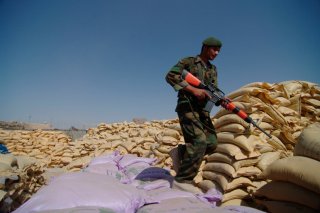 Here's What You Need to Remember: If the US does not lead an international effort to tackle Afghanistan’s opioid and meth production, the Taliban’s power—and ability to commit atrocities—will only grow and its narco-state will serve as a haven for al-Qaeda and other violent jihadist groups. As matters stand, the world can expect a major surge in international terrorism and drug overdoses in the months and years ahead.

The strategic folly of US President Joe Biden’s Afghanistan policy has been laid bare in recent weeks. First, the country came back under the control of the Pakistan-reared Taliban. The announcement of the interim government’s composition then dashed any remaining (naive) hope that this Taliban regime would be different from the one the United States and its allies ousted in 2001. Beyond the cabinet including a who’s who of international terrorism, narcotics kingpins occupy senior positions.

Afghanistan accounts for 85% of the global acreage under opium cultivation, making the Taliban the world’s largest drug cartel. It controls and taxes opioid production, oversees exports, and shields smuggling networks. This is essential to its survival. According to a recent report by the United Nations Security Council monitoring team, the production and trafficking of poppy-based and synthetic drugs remain ‘the Taliban’s largest single source of income’. So reliant is the Taliban on narcotics trafficking that its leaders have at times fought among themselves over revenue-sharing.

The Taliban is hoping to expand its drug income as much as possible. Since its takeover, prices of opium in Afghanistan have more than tripled. In India—which is situated between the world’s two main opium-producing centres, the Pakistan–Afghanistan–Iran ‘golden crescent’ and the Myanmar–Thailand–Laos ‘golden triangle’—seizures of Afghan-origin heroin have increased. As the UN Office on Drugs and Crime warns, the economic crisis Afghanistan currently faces will only increase the appeal of illicit crop cultivation for local farmers.

The problem extends beyond opioids. In recent years, Afghanistan has drastically expanded its production of methamphetamine. The appeal lies in the fact that meth offers producers a higher profit margin than heroin, owing to lower overhead costs and inexpensive ingredients, especially now that its chemical precursor, pseudoephedrine—a common ingredient in cold medications—is being produced locally.

Last year, the European Monitoring Centre for Drugs and Drug Addiction warned that Afghanistan’s meth industry could soon be as large as its heroin industry. While the Taliban was not yet in control of Kabul at the time, it controlled the majority of Afghanistan’s small, clandestine meth labs.

The Taliban uses several smuggling routes to move opiates. It moves output to Western Europe via the Caucasus and the Balkans, and from there all the way to North America. With the help of the Tajikistan-based terrorist group Jamaat Ansarullah, it also uses a northern route to Russia. The southeastern route, which snakes through Pakistan, is enabled by Pakistani security officials, who cooperate with the Taliban and smuggling syndicates, known locally as ‘tanzeems’, in exchange for bribes.

In 2008, a Taliban drug trafficker was recorded boasting that most of his product ended up abroad. ‘Good’, he gloated. ‘May God turn all the infidels into dead corpses. Whether it is by opium or by shooting, this is our common goal.’ With the Taliban channelling profits from drug sales directly into its terror machine, the connection between Islamist violence and drug trafficking could not be starker.

This is not exclusive to the Taliban; Islamist groups like Boko Haram, al-Shabaab and al-Qaeda are also linked to drug trafficking. But not all terrorist groups are on board with this approach. As a 2020 UN Security Council report points out, the Islamic State–Khorasan—IS’s Afghan arm—opposes the drug trade.

This is one reason why the outfit is an enemy of the Taliban, despite the two groups’ longstanding personal relationships, common history of struggle and shared belief in violent Islamism. In fact, when IS-K had control of the Afghan border province of Nangarhar, it blocked the Taliban’s trafficking routes into Pakistan. The link was restored only when the US and Afghan government forces smashed the IS-K stronghold there.

This highlights the failure of the US—and the West more broadly—to recognise the complex but clear links between drug trafficking and Islamist terrorism. Had the 2001 invasion of Afghanistan been followed by a US campaign to arrest and prosecute Taliban leaders for their narcotics-trafficking activities in American courts, the group’s appeal among fundamentalist Muslims might have been severely diminished.

Such a plan was proposed in 2012. In a 240-page memo, the US Drug Enforcement Administration and several Justice Department officials recommended prosecuting 26 senior Taliban leaders and allied drug lords for criminal conspiracy. A similar approach worked in Colombia, and helped to force the narcotics-funded Revolutionary Armed Forces of Colombia (FARC) to make peace with the Colombian government in 2016, after 52 years of guerrilla war.

But successive US presidents refused to use this strategy against the Taliban, which was a strategic mistake with costs that are only beginning to be revealed. By allowing the Taliban to enrich and sustain itself with drug profits during the 20-year war in Afghanistan, the US contributed to its own humiliating defeat at the hands of a narco-terrorist organisation.

It’s not too late for the US to start targeting the Taliban as a drug cartel through its federal courts. After all, Afghan-origin opioids have resulted in high rates of drug addiction and deaths around the world, from the US and Europe to Africa and Asia. And, given Afghanistan’s economic woes, the Taliban has a strong incentive to ramp up production and trafficking.

By highlighting the nexus between Islamist terrorism and the global narcotics trade, US indictments of the Taliban’s drug kingpins would help to build multilateral cooperation to crush the group’s primary source of income, such as by blocking shipments and seizing illicit profits, often parked in banks and real-estate investments abroad.

If the US does not lead an international effort to tackle Afghanistan’s opioid and meth production, the Taliban’s power—and ability to commit atrocities—will only grow and its narco-state will serve as a haven for al-Qaeda and other violent jihadist groups. As matters stand, the world can expect a major surge in international terrorism and drug overdoses in the months and years ahead.

Brahma Chellaney, professor of strategic studies at the New Delhi–based Centre for Policy Research and fellow at the Robert Bosch Academy in Berlin, is the author of several books, including Asian juggernaut, Water: Asia’s new battleground and Water, peace, and war: confronting the global water crisis. This article is presented in partnership with Project Syndicate © 2021.

This article was originally published by the Australian Strategic Policy Institute.