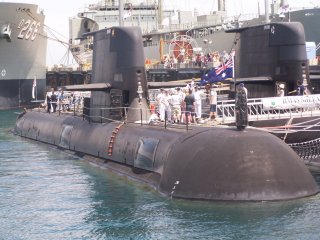 At Senate estimates hearings on 24 March of this year, the independent Senator Malcolm Roberts bluntly asked Defence Department officials, ‘If the last sub will be delivered in the 2040s and the first delivery is estimated to be in 2032–33, won’t these subs be obsolete by the time they are ready for the water?’ (page 62 here). The officials answered, ‘No, they won’t be obsolete by the time they enter the water. We are also designing this submarine to … keep them superior throughout their service life.’ That answer was consistent with the one repeatedly delivered by ministers and officials since the Attack class was chosen in 2016, despite it being a conventional, not nuclear, design.

Roberts was expressing what many were thinking—and was remarkably prescient. On Monday, Prime Minister Scott Morrison, discussing the events that led to the cancellation of the Attack class deal with France’s Naval Group, said that the first submarine would have been obsolete almost the minute it got in the water. And it was ‘the unanimous view of all the chiefs of our services and defence force, that this was a capability that was not going to meet our needs’.

Similarly, Defence officials had consistently denied suggestions at estimates that there were significant delays in the project by saying that the first Attack-class boat would be operational by 2034. Yet the prime minister said that ‘our view [was] that this project would be further delayed and that would not see a submarine in the water until the late 2030s and possibly as late as 2038’.

What are we to make of this? How confident should we be in any of Defence’s statements on other key capabilities? Will the Hunter-class frigate be a superior and survivable capability when (or if) it starts to enter service around 2033? Will the army’s $40 billion investment in armoured vehicles be worth it in the face of the cheap drones and missiles that are available to any state that wants them? Can the navy avoid a submarine capability gap during the (now even longer) transition to its future submarines?

Since we started by talking about submarines, we’ll look at the last of those questions. First, a word of warning. It’s important not to fall for the old street magician’s trick in which he steals your watch while diverting your attention somewhere else. Don’t fall for Defence’s line that it can keep the Collins-class submarines going until the SSNs arrive, because that’s an entirely separate issue from a capability gap. If you do, you’ve already lost your watch.

The 2009 white paper was the first defence strategic planning document to announce that Australia would acquire a fleet of 12 submarines. This requirement was driven by Australia’s changing strategic environment. Those submarines were meant to start entering service around 2025. We can argue about whether that was a realistic date, but the intent was to increase Australia’s submarine capability beyond six Collins-class boats.

Since 2009, no government has wavered from the intent to increase our submarine capability. Moreover, there is broad consensus that Australia’s strategic circumstances have become more perilous, reinforcing that requirement. Yet the timeline for delivery of that additional capability has moved from 2025 to 2034 and now to the late 2030s.

By definition, we’ll have a gap because we won’t have the capability that strategic assessments have repeatedly said we need. That gap already exists. The 2020 defence strategic update states that the Australian Defence Force is a largely defensive force that can’t deter attacks on Australia or ‘hold potential adversaries’ forces at risk from a greater distance’. Regardless of how many Collins we have, that gap will grow through the 2020s and into the 2030s as the wished-for future submarines are still not delivered.

But let’s play along with the magician and accept that preventing a gap is all about keeping the six Collins in working order to meet Defence’s requirement, which is to generate out of the fleet of six boats four that are available to the fleet commander of which two are deployable. Officials have indicated that the planned life-of-type extension will allow the Collins to continue to meet that requirement. But that’s mistaking carts for horses.

Two deployable boats are the requirement because that’s all that can possibly be generated out of a fleet of six, not because two is the magic number that will keep Australia safe. So simply saying that Defence can keep six boats in service says nothing about whether we will have the capability we need. Two boats, by the way, can’t sustain a presence in even one area at any distance from Australia; we’ll come back to that issue in a minute.

But will Defence even meet that requirement? First, there’s the issue of whether the Collins will be a relevant capability. Here’s another of those strange moments in cognitive dissonance. Defence has been telling Senate committees for years not only that the Attack class would be regionally superior, but that it would also keep the Collins class as a regionally superior capability until it was withdrawn from service (see page 49 here, for example). However, its view was also that there was no alternative to the Attack because it was the only conventional boat that could provide a regionally superior capability (page 19 here, for example). So if the Attack was going be obsolete by the 2030s, it’s hard to see how any conventional submarine could be regionally superior into the 2040s, let alone one that’s at least a generation older.

That’s before we look at the issue of whether a fleet of six ageing boats can sustain the number of sea days needed to produce the much large number of submariners Australia will need to transition to the future SSN fleet. I’ve referred in an earlier piece to the Canadians’ fleet of four ageing submarines that couldn’t achieve a single sea day in 2019, which makes the navy’s goal of generating 1,400–1,600 submariners by the mid-2030s—that is, before the first new boat arrives—look pretty ambitious.

What can we do about it? The first step is to move beyond our unhealthy fetish with finding the perfect submarine, which has achieved nothing other than getting us even further away from having any new submarines than we were in 2009 when this unhappy journey started.

My colleague Michael Shoebridge has already drawn attention to what was perhaps one of the most illuminating exchanges at estimates in recent years. Liberal Senator and former general Jim Molan asked (page 24) Chief of Navy Mike Noonan whether ‘the only thing that a submarine can do that other things can’t do is perhaps have a significant and enduring presence?’ Noonan replied that the senator had put it well. But if the main effect that submarines can deliver that other platforms can’t is presence, a fleet of six submarines can’t do that well since it can’t even sustain one boat on station. In the estimates hearing, ADF Chief Angus Campbell then elaborated on the need to think of capability in terms of systems of systems rather than focusing on platforms.

It was an emperor’s new clothes kind of moment—a statement of the obvious but unsayable. Why, then, are we so obsessed with submarines?

The main challenge for Defence over the coming decades is not to deliver a fleet of SSNs. With enough time, money and help from our partners that will eventually happen. The main challenge will be ensuring that the focus on SSNs doesn’t suck all the oxygen out of the room. Defence needs to make sure it devotes even more effort, funding and, most importantly, imagination to rapidly acquiring other systems that can deliver the effects it requires, including those it seeks from submarines.

ASPI analysts have written often both about those kinds of systems and about more agile ways to acquire them, and I won’t repeat those ideas here. But when you have an addiction, the first step to beating it is to acknowledge it. We are addicted to submarines.

Marcus Hellyer is ASPI’s senior analyst for defence economics and capability. He is on Twitter at @Marcus_ASPI.