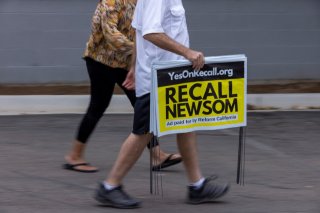 Repeated polls have indicated a surprisingly small margin for the recall election of California Gov. Gavin Newsom in a state where Democrats outnumber Republicans by two-to-one and President Joe Biden defeated Donald Trump in the state by a 30-point margin. Consequently, the state’s Democratic coalition has mobilized, pushing progressive activists out to campaign on the embattled governor’s behalf.

On the basis of the state’s demographics alone, Governor Newsom appears set to defeat the recall motion. Polls have suggested that most voters in the state, including the overwhelming majority of Democrats, would like to keep Newsom, who earlier served as the mayor of San Francisco and then as the state’s Lieutenant Governor under his predecessor, Jerry Brown.

However, most indications suggest that the state’s Republicans, a significant minority of the population, will vote to recall the governor at much higher rates than his defenders, many of whom have regarded the election as a certain win. The belated realization that Newsom could lose—borne out by recent polls that show a much more discontented voter base than most observers had realized—has prompted a late rush of mobilization for the governor among Democratic campaigners.

The pro-Newsom campaign has largely castigated the recall effort as an expensive gimmick by a group of disaffected Trump-supporting Republicans, wasting California millions of dollars during the pandemic. Yet Newsom has made some genuinely unpopular decisions as governor; his attitude towards school closures in particular, in which he effectively allowed the state’s teachers union to continue to delay re-opening, has been a major point of contention among California parents. The governor’s personal actions have drawn scrutiny as well, including an infamous dinner at an expensive French restaurant in Napa that violated Newsom’s own safety protocols.

Other statewide crises, including a historic drought, a spate of wildfires, the state’s recurring homelessness problem, and the ongoing coronavirus pandemic, are harder to pin on Newsom specifically, but his opponents have criticized his response to each.

A successful recall of Newsom could have nationwide implications. His successor for governor, most likely Republican radio host Larry Elder, would have the authority to undo Newsom’s executive orders on coronavirus lockdowns and could appoint statewide officials, up to and including senators to Washington, DC if a vacancy came open—potentially tipping the deadlocked Senate in the direction of the Republican Party.