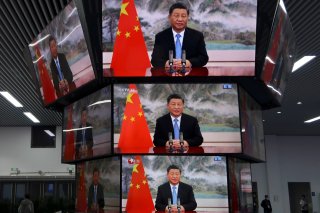 Here's What You Need to Know: Through a variety of methods, the Chinese military and other agencies have been pushing their narrative of the world and trying to influence public opinion.

The U.S. Special Operations Command (SOCOM) has created a new joint task force to fight against Chinese information operations in the Pacific.

Army General Rickard D. Clarke, the commander of SOCOM, revealed the new task force during a testimony to the Armed Services Committee.

In an increasingly inter-connected world where news (fake and real) shapes the views and opinions of billions of people, information operations are critical. People have the tendency to believe the first account they hear, watch, or read regardless of its veracity. Thus, they make easy targets for influence by malign state or non-state actors. In other words, people have historically been receptive to propaganda and the more modern term of “fake news.”

Through a variety of methods, the Chinese military and other agencies have been pushing their narrative of the world and trying to influence public opinion. The plight of the Chinese Uighurs is a prime example of this. The Uighur Muslim minority has been prosecuted by the Chinese government and millions have been transported to concentration camps for “re-education” and even sterilization. Beijing tries to justify these odious practices reminiscent of Nazi Germany by citing security and anti-terrorism concerns.

Disputing the sovereignty of the South China Sea is another example of Chinese information operations. Despite a ruling by the International Court of Justice against the Chinese claim, the Chinese government continues to push its narrative that threatens to destabilize a vitally important region of the world. Beijing knows that it can’t convince any serious powers about its claims, but if it can justify them to its own people or convince some of its neighbors, then that is a success for them.

To be sure, every major player (and some minors like Germany) uses soft power to influence others and shape the environment in their favor but there is a clear line between what amounts to justified influence and trying to justify what amounts to genocide.

Although General Clarke suggested that this is a joint task force, the Army is taking the lead because of its already established capabilities in information operations. More specifically, besides Green Berets and Rangers, the Army Special Operations Command contains Civil Affairs and Psychological Operations units.

Civil Affairs units bridge the military and diplomatic worlds by creating the necessary civil and political conditions for diplomacy to be most effective. For example, Civil Affairs troops help build infrastructure, address local community issues, and assist during and after a natural disaster. They go after the hearts of the local population in an attempt to win them over.

(On a side note, they're both conventional and special operations Civil Affairs and Psychological Operations units.)