Can India Balance Its Relationship With Russia and America? 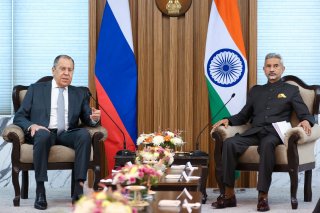 Here's What You Need to Remember: Recognising that and Russia’s importance to India, New Delhi has tried to show Moscow that it’s not drifting away from the relationship.

The end of 2021 may prove to be an important milestone in the evolution of strategic relations between Russia and India. On 6 December, Russian President Vladimir Putin flew into New Delhi on a one-day state visit. The one-on-one meeting with Indian Prime Minister Narendra Modi, which lasted three and a half hours, was aimed at restoring confidence between the two powers as time-proven and trusted strategic partners.

For Putin, the trip to India was only his second overseas visit since the outbreak of the Covid-19 pandemic (the other was the first meeting with his US counterpart Joe Biden in Geneva). That fact alone signifies the importance of India to the Kremlin and the desire to keep relations close. But Putin’s brief visit to New Delhi was just part of broader high-level bilateral talks, which included an impressive entourage representing both countries.

The last time Putin and Modi met was in 2019 during the Eastern Economic Forum in Vladivostok. After that, the two leaders paused their interactions. The reason, they claimed, was the Covid-19 outbreak.

The relationship had been cooling long before Covid-19 struck, however. New Delhi felt that Moscow was taking advantage of India, playing upon its fears of China. The case of India’s purchase of a modified Russian cruiser turned aircraft carrier is one example. It led India’s comptroller and auditor-general to lament that India had paid 60% more for a second-hand aircraft carrier than a new one would have cost. Admiral Arun Prakash, a former chief of the Indian naval staff, was equally scathing in his evaluation of the Russian MiG-29K aircraft that were to be used on the aircraft carrier.

Russia, for its part, was unhappy with India’s growing ties to the US. Between 2007 and 2020, India spent more than US$17 billion on military purchases from the US. Russia was particularly unhappy that India had entered into four ‘foundational’ security agreements with the US that cover the transfer of military information, logistics exchanges, compatibility and security.

At the same time, Russia’s relationship with China was growing through the Shanghai Cooperation Organization and its ties to the Collective Security Treaty Organization, which was established to ensure the security of the Soviet Union’s successor states. Russia and China, seeing the US as a common antagonist, collaborated on technology transfers, Russia’s sale of energy products to China, and increased trade and tourism. They have engaged in joint military exercises and naval and air patrols.

That said, there remains the suspicion that Moscow is ‘passively facilitating’ New Delhi’s role in the Quad in order to restore equality in its strategic relations with Beijing. That could help revive, in turn, its stalled ‘new détente’ with the West.

India is suspicious of Russia’s developing relationship with Pakistan. New Delhi worries that Moscow is hyphenating its relationships with its two neighbouring enemies. That suspicion grew when Russia didn’t invite India to a meeting it convened with China, Pakistan and the US on the Afghanistan situation, a move that was seen as a deliberate snub in New Delhi.

India needs the potential security that Russia can provide. Little wonder, then, that it was prepared to purchase the S-400 air-defence system from Russia despite US pressure not to, and to offer an invitation to Putin to visit India, which he accepted.

The two countries launched ‘2+2’ ministerial consultations involving their foreign and defence ministers, making Russia the fourth partner with which India has the same format (the other three are the other Quad members: Australia, Japan and the US).

They also signed another 10-year agreement on joint military–technical cooperation until 2031 and agreed to expand and deepen bilateral defence cooperation. Adding to that, Russia has reaffirmed its position as one of the principal providers of advanced military technology to the Indian military. Since 1991, India has acquired a comprehensive suite of weapons and platforms for all its fighting services worth some US$70 billion. The current value of India’s defence contracts with Russia is approximately US$15 billion.

Perhaps one of the most important outcomes for Russia was India’s reassurance that it is not siding with US strategic plans to form a regional political–military containment bloc. According to Russian Foreign Minister Sergei Lavrov, the Indians ‘distanced themselves from the AUKUS bloc’. He said, ‘They are part of the Quad group, which brings together India, Japan, Australia and the US, and India … emphasises its interest in economic infrastructure and transport projects within this framework.’

Clearly, though, the talks didn’t eradicate all contentious points in the relationship. India is likely to remain concerned about Russia’s ties to China, Pakistan and the Taliban. Despite ambitious goals, the bilateral economic relationship won’t reach the levels of the ones that India enjoys with the US and China.

Even in the defence cooperation sphere, which is at the core of Russia–India strategic ties, some issues persist. For example, the two countries failed to finalise the reciprocal logistics support agreement, which was supposed to become an important stepping stone in closer military-to-military interaction.

On the other hand, the meetings highlighted the special nature of Russia–India strategic relations as well as mutual will to keep nurturing them.

The meetings in New Delhi came less than a week after the visit to Moscow of the president of Vietnam, a country with which Russia developed a comprehensive strategic partnership a decade ago. Both events highlight Russia’s more flexible approach towards its strategic engagement in the Indo-Pacific, despite the centrality of China in Russia’s Asia policy.

Putin’s meeting with Modi also happened to take place a day before the Russian president had his second major interaction with Biden, and just days before the US-led Summit for Democracy, to which Moscow was not invited. For Putin, it was important to show Washington and Brussels that Russia has a network of strategic partners it can call upon.

Recognising that and Russia’s importance to India, New Delhi has tried to show Moscow that it’s not drifting away from the relationship. New Delhi recognises that Moscow can’t fully trust Beijing, which makes the Indo-Russian relationship all the more important. India’s purchase of the S-400 missile system despite US pressure was meant to send exactly that message. The launch of the 2+2 ministerial consultations is likely to ease Russia’s concerns that New Delhi has been gradually drifting towards the US geopolitical orbit, confirming that India is ‘not in anyone’s camp’.