Can NATO Counter Russia in the Black Sea? 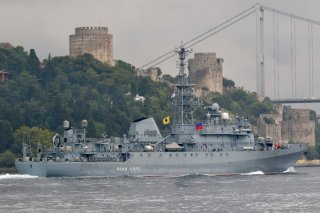 Here's What You Need to Remember:  Yet another headache for NATO are Russia’s newest tactical weapons: the Tsirkon winged, hypersonic cruise missile curtails the ability of carrier strike groups (CSG’s) to project power deep into Russian territory, as does the Kh-47M2 Kinzhal air-launched ballistic missile.

The past several weeks have seen a sharp escalatory spiral between Russian and NATO forces in the Black Sea Region, spurred by the HMS Defender incident and the Kremlin’s reaction to the ongoing Seabreeze exercises. But can these tensions rise to the level of a full-blown military confrontation in the Black Sea, and what form could such a conflict take?

The Black Sea has been a military flashpoint between competing regional powers for centuries, harkening back to Imperial Russia’s drive to establish a warm-water port during the early Russo-Turkish Wars. Then as now, Russian policymakers saw the Crimean peninsula as an indispensable means of projecting power into Eastern Europe, the Western Caucasus, the Mediterranean, and beyond. Soviet leader Nikita Khrushchev transferred Crimea to the Ukrainian Soviet Socialist Republic in 1954; in the aftermath of the Soviet collapse, Crimea became part of the post-Soviet state of Ukraine. The Kremlin annexed Crimea shortly following the 2014 Euromaidan Revolution, but the peninsula continues to be internationally recognized as part of Ukraine.

At the heart of the current regional volatility in the Black Sea is the ongoing territorial dispute between Russia and Ukraine over the status of Crimea. Kiev and several western powers have taken symbolic steps in recent years to assert Ukraine’s territorial integrity, conducting military exercises near or innocent passage operations through Black Sea waters claimed by Russia. The Kremlin has responded with increasing firmness to these sporadic incursions, which it calls “provocations.” Late last month, the Coast Guard and Black Sea fleet fired warning shots and dropped bombs in the path of the British Type 45 Destroyer HMS Defender to chase the warship away from Russia’s claimed territorial waters off the Crimean coast. Russian President Vladimir Putin said in a subsequent TV appearance that Russia’s military could have sunk the Defender without triggering a large-scale war because, in his words, the west knows it cannot win such a conflict.

Putin’s confidence may not be entirely misplaced. In the years following Crimea’s annexation, Russia has steadily built up its Black Sea Fleet. The fleet has received three modernized Guided Missile Frigates from the Admiral Grigorovich class, as well as a slew of diesel attack submarines from the improved Kilo (Project 636.3) series. These new warships are but one part of the drastic growth of Russian anti-access/area-denial (A2/AD) capabilities in the Black Sea region, which also include a sprawling web of missile defenses operating out of Crimea. Yet another headache for NATO are Russia’s newest tactical weapons: the Tsirkon winged, hypersonic cruise missile curtails the ability of carrier strike groups (CSG’s) to project power deep into Russian territory, as does the Kh-47M2 Kinzhal air-launched ballistic missile.

To make matters worse, NATO forces engaging Russian assets in the region cannot count on extensive local support. The other major Black Sea power, Turkey, is a NATO member that has consistently impeded the alliance’s security objectives while pursuing closer military and economic ties with Moscow. Ukraine, Romania, and Georgia can and almost certainly will provide port access and maritime passage to U.S. forces, but lack the naval capabilities to make meaningful military contributions beyond that.

The Russian military has the means to mount an effective A2/AD campaign against allied forces in the Black Sea, deterring and imposing costs on NATO assets in the initial stages of a regional war. There is no shortage of feasible scenarios that could lead to a wider Black Sea conflict, including a prospective redux of the Kerch Strait incident, further western innocent passage operations off the Crimean coast, or the dangers implicit in both sides conducting large-scale military drills under each others’ noses. Disparate as they are, these scenarios all have one thing in common: none of them offer so much as a hint of a quick, convincing NATO victory.