Can the Navy Defend Its Aircraft Carriers From Death by Submarine? 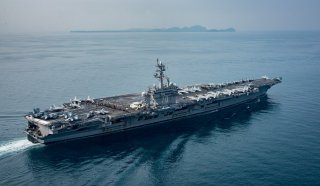 Here’s What You Need to Remember: Adding submarine hunting capabilities to the Navy’s fighters may simply be another facet of a much larger integration effort, but it’s one the Navy may want to pursue sooner, rather than later.

A recent proposal penned by Navy and Marine Corps personnel for the U.S. Naval Institute breaks down how the Navy could quickly (and cheaply) make its carrier-based fighters into highly capable submarine hunters. If adopted, this approach could offset a serious vulnerability in America’s carrier strike groups brought about by the retirement of the S-3 Viking in 2016.

Despite the long list of sensor advances since the end of World War II, submarines remain one of the most potent threats to America’s surface fleets. But unlike many other tactical threats America has managed to offset through new technology, the U.S. Navy’s ability to defend against submarine attacks has diminished in recent years, while nation-level opponent submarine capabilities have improved.

During the Cold War, the Navy relied on a sequential approach to tracking enemy submarine movements and, if necessary, engaging them. The process began with intelligence indicating a submarine was leaving port, followed by indications of the submarine’s movement via sonar arrays placed on the seafloor in chokepoints created naturally by the landscape. From there, it was up to patrol aircraft, usually S-3 Vikings, to track subs using specially designed equipment like sonar buoys, until an attack submarine, platforms that specialize in undersea warfare, was in place to tail the enemy boat.

Even with S-3’s hunting for subs in the proximity of America’s carriers at the time, a small Swedish diesel-powered submarine called the HSMS Gotland managed to sink the Nimitz-class carrier USS Ronald Reagan repeatedly in war games despite costing about as much as a single F-35 and maintaining an average submerged speed of just six miles per hour. The Gotland was able to be so sneaky, in large part, thanks to a diesel-electric powerplant that relies on liquid oxygen, rather than surfacing, for the oxygen needed for combustion. Of course, you can find similar small and sneaky diesel subs in both China’s and Russia’s own fleets.

But then the Navy’s primary fleet of AntiSubmarine Warfare (ASW) patrol aircraft, made up of Lockheed S-3 Vikings, aged out of service by 2016, leaving that portion of the ASW sequence bereft of long-range airframes for the job. Today, land-based P-8A Poseidon aircraft or Arleigh Burke-class guided-missile destroyers pick up the slack left by the retired Vikings, but the Navy needs a carrier-based option.

Of course, developing and fielding a new airframe specifically for the role would be optimal, but unrealistic in today’s budgetary models. A new clean-sheet build would also take years to push into service, but a proposal titled, “Use Emerging Technology For ASW” penned by Marine Corps Captain Walker Mills and Navy Lieutenant Commanders Collin Fox, Dylan Phillips-Levine, and Trevor Phillips-Levine offers a cost-effective solution that could put sub-hunters right back on the deck of America’s flattops: Equip the Navy’s fighters to hunt the submarines themselves.

Missiles like the YJ-18B, a Chinese submarine-launched anti-ship weapon, have ranges of nearly 300 miles — much too far for sonar to detect the presence of a submarine within launching distance. That is, however, well within reach for carrier-based fighters responding to a ballistic missile launch, particularly if they’re airborne on an ASW patrol. Using the F-35’s suite of onboard sensors, these jets may well be able to identify the location of a launching submarine in short order, though today, there’s little the fighter could do about it.

Today, the Navy might deploy MH-60Rs to engage the enemy submarine, but it would take the helicopter over an hour to reach a launch point 200 miles from the deck of the carrier. By that time, the submarine would almost certainly be long gone. However, if the Navy’s F-35Cs and F/A-18s were equipped with deployable sensors intended for tracking submarine positions, these aircraft could deploy their collectors before having to return to refuel, granting far better awareness of the submarine’s movements than the Navy can muster today.

With new weapons designed to engage submerged vessels, these stealth and non-stealth fighters alike could become dynamic submarine hunters, using those deployed sensors to track submerged vessels and then leveraging specialized munitions to eliminate them. Of course, designing new sensor packages and weapons wouldn’t be all that cheap either, and space is at a premium on aircraft carriers, so a new arsenal of weapons could cause storage issues.

And therein lies the real crux of the proposal: It wouldn’t be that expensive if we simply got creative with equipment and systems we already have on the shelf.

Finding the Subs May Be the Expensive Part

One technology that is in dire need of revamping would be America’s Sonobuoys, or the buoy sensors deployed by patrol aircraft to detect the presence of nearby submarines. Because the Navy’s fighters don’t have a great deal of loiter time to leverage, they would need to deploy buoys that can keep track of a submarine between sorties, and today’s stationary platforms simply won’t cut it.

That’s where the proposal calls for the deployment of both airborne and submersible drones, which could not only detect the presence of a submarine, they could follow it as it attempts to flee the area, keeping the carrier strike group and nearby ASW aircraft apprised of the submarine’s location even after the fighters depart.

"Dubbed the photoacoustic airborne sonar system (PASS), these low-flying drones use lasers to vaporize water near the surface to generate underwater sound, which propagates like any other sonar ping,” the article reads. “The UAV also carries an array of capacitive micro-machined ultrasound transducers (CMUT), which are sensitive enough to detect sonar returns across the water-air barrier.”

These small sonar drones would be bolstered by small submersible drones, also deployed from airborne ASW aircraft, and the addition of a larger drone loitering over the area could provide targeting data in real-time to weapons deployed by distant fighters, launching from the deck of a carrier hundreds of miles away. As the proposal points out, this loitering drone could also tie the distributed sensors from small airborne and submersible drones into a single sonar system for precision targeting.

Breaking Hulls, not the Bank

Today, the Navy’s fighters are not equipped to engage submarines, though they could be with aerial iterations of the Mk-54 lightweight torpedo or the Compact Rapid Attack Weapon (CRAW) torpedoes currently deployed by surface ships. However, adding new weapons to the standard carrier loadout wouldn’t be optional, as space is constantly at a premium aboard ship and, of course, developing stuff can be pretty expensive.

But the group of Marine and Navy officers have an inexpensive solution that just might work:

The Navy could create an affordable and nearly unlimited antisubmarine smart weapon by transforming the humble depth charge. Following the basic configuration of Quickstrike air-dropped mines, this novel depth charge would use any Mk-80 series bomb, a high-drag ballute tail unit, and an underwater proximity fuse installed in the rear fuse well.

While these depth charges would be highly effective, the only extra gear the carrier would have to carry would be the underwater proximity fuses, which would take up very little space.

Just Part of a Bigger Solution

Equipping the Navy’s fighters to hunt enemy submarines would go far in increasing the survivability of America’s carrier strike groups, but it’s an imperfect solution at best. Because of the severity of the threat submarines pose to America’s surface fleets, a broad spectrum of new and old technologies will have to be leveraged in a way that offers a compounding degree of situational awareness and quick-strike capabilities. Finding the submarines is essential, but its only through engaging them that the threat can be eliminated.

With only a third or so of the range of the now-retired S-3 Viking, the F-35 and F/A-18 wouldn’t have the loiter time America’s previous submarine-hunting approach required, but through the addition of new but inexpensive technologies, they could eventually prove just as effective a piece of a larger ASW pie, especially when bolstered by other new technologies aimed at submarine detection, like the Anti-Submarine Warfare Continuous Trail Unmanned Vessel program.

“The speed and range of fixed-wing, carrier-based aircraft equipped with sonobuoy launchers, mobile sensors, and advanced ASW weapons could help recover much of the S-3 Viking’s capability,” the proposal states. “Weaving a variety of these emerging tools and techniques into new operational concepts can do that and more.”

As the entirety of the Defense Department continues to push toward a more integrated and broadly capable force, adding submarine hunting capabilities to the Navy’s fighters may simply be another facet of a much larger integration effort, but it’s one the Navy may want to pursue sooner, rather than later.