Can Navy Drones Overcome the ‘Tyranny of Distance’ in the Pacific? 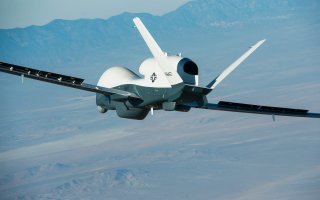 Here's What You Need to Know: The current U.S. Navy program plan is to operate sixty-eight Triton drones in the Pacific.

The Pacific theater spans one hundred million square miles, from the West Coast of the United States to the Indian Ocean and all the way to the Arctic, a reality regularly described as something which imposes a “tyranny of distance” upon U.S. and allied forces seeking to track, cover, blanket and surveil activities in the region.

“There are not many airfields and there is a lot of open water,” Air Force Pacific Commander Gen. Kenneth Wilsbach told reporters at the 2021 Air Force Association Symposium, upon citing that the Pacific spanned one hundred million square miles.

Wilsbach was discussing the Pacific with a mind to emerging Chinese threats in the region and a need to counter rapidly modernizing Surface to Air Missiles. Interestingly, Wilsbach mentioned land and sea threats together as part of the threat equation, pointing out that, while most people tend to think of SAMS in terms of ground-based air defenses, surface ships are fast acquiring new anti-air weapons which introduce new maritime threats as well.

“We need to get into those anti-access/area-denial zones and operate in those areas so we can create effects and take down SAMS that are on the land or at sea . . . and take away our adversaries’ domain awareness,” Wilsbach said.

There are many ongoing efforts to address these challenges, including F-35 sensor and weapons upgrades, the anticipated arrival of a sixty-generation stealth fighter, and, perhaps of greatest significance, additional high-tech surveillance assets. Wilsbach did mention a need for additional surveillance technology in the Pacific, raising interesting questions about the “insatiable” appetite for intelligence, surveillance and reconnaissance (ISR), a dynamic requiring a particular technical capacity for maritime surveillance.

Given this scenario, one might think that there could be a need to add more Navy Triton surveillance drones in the Pacific, along with early warning aircraft and ship-operated ISR technologies. Currently, there are only two Tritons operating in the Pacific, and while that is only the early operational capability deployment there are real questions about whether the full program of record will meet demand. The current program plan for Tritons is to operate sixty-eight of the drones, yet could there be a need for more?

While Navy officials did not comment on any specifics regarding future plans regarding the number of surveillance drones or Tritons in the Pacific, they did mention the drone’s performance in theater and talk generally about the pressing demand for more ISR.