Can the Pentagon Counter Russia's Expansion In the Arctic? 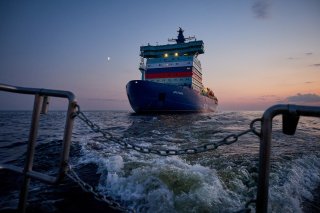 Here's What You Need to Remember: These dynamics are likely part of the reason why the Pentagon is revving up Arctic patrols with Norway-based B-1 bombers and joint exercises with B-2 bombers, B-1 bombers, and F-35 jets all flying together as part of a coordinated patrol.

Russia’s Arctic expansion has long been known as a source of significant U.S. military concern, given the country’s proximity to the region and well-documented expansionist ambitions.

Part of this equation pertains to Russia’s Northern Sea Route bordering the Arctic and the large number of icebreakers the country operates, particularly when compared with the vastly smaller U.S. fleet of icebreakers.

Now both of these dynamics are becoming increasingly complex and challenging for U.S. decisionmakers, because Russian President Vladimir Putin is announcing that not only will Russia add new icebreakers at a rapid pace but also massively increase its patrols along the Northern Sea Route to include year-long operations. Russian tactical operations along the route will no longer be seasonal but will now be continuous.

“Navigation over the Northern Sea Route may be provided in all seasons in years to come, which is highly likely,” Putin said, according to a report in Russia’s TASS newspaper. “Russia is building the world’s most powerful icebreaker fleet, including such giants as Lider, which no one has ever built before,” Putin noted.

“Moscow announced it will increase the number of S-400 air and missile defense units deployed across its Arctic territory, which tracks with its deployment of more sophisticated equipment to defend its air and maritime domains,” the strategy states. “These systems create a “protective dome” across Russia’s vast Arctic coastline and improve its overall operational ability to detect and track vessels and aircraft. These systems give Russia almost complete coverage of its northern coastline and adjacent waters.”

Added ice breakers are also of great significance given what’s known about the pace of change in the Arctic related to melting ice and opening waterways. As the water level rises and icebreakers chart new paths through layers of ice, more icebreakers are likely to expedite the process through which new waterways emerge. New waterways open up tactical and strategic opportunities for new operations such as territorial claims and other methods of claiming military advantage and potential access to routes of attack.

These dynamics are likely part of the reason why the Pentagon is revving up Arctic patrols with Norway-based B-1 bombers and joint exercises with B-2 bombers, B-1 bombers, and F-35 jets all flying together as part of a coordinated patrol.