Can Russian Airborne Early Warning Aircraft Keep Up With the U.S. Air Force? 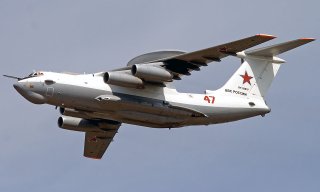