Can This Small Indian Ocean Island Be the Key To Stopping Chinese Hegemony? 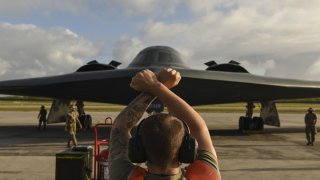 The strategic contest between China and the United States has taken an interesting turn. Last week the Pentagon confirmed that three American B-2 Spirit stealth bombers had deployed from Whiteman Air Force Base in Missouri to Diego Garcia.

This appears to be the first time since 2016 that B-2s have been sent to the US Indian Ocean island base. And it comes only six months after six B-52 Stratofortress bombers were dispatched to the archipelago, where they remain.

The US Air Force’s official line for the bomber taskforce deployment is that it demonstrates the US national defence strategy in action. ‘We are sharpening our lethality while strengthening relationships with key allies, partners, and our sister-service teammates,’ said the taskforce commander, Lieutenant Colonel Christopher Conant.

On the face of it, the arrival of B-2s and B-52s could be seen as a standard deployment of military assets. However, it was also reported that the Chinese People’s Liberation Army Navy was planning a live-fire training drill starting 16 August, 545 kilometres north of Taiwan near the Zhoushan Islands.

The Chinese live-fire exercise is just the latest manifestation of increasing tensions between Washington and Beijing over the militarisation of the South China Sea. Worryingly, this exercise is seen by some as a simulation for seizing the Pratas or Dongsha Islands. These islands are administered by Taiwan and lie 310 kilometres southeast of Hong Kong between the South China Sea and the Pacific Ocean. PLA Navy vessels must pass those islands before they can reach the Pacific Ocean.

So, what could the deployment of B-2s and B-52s to Diego Garcia in the Indian Ocean have to do with a live-fire exercise in the East China Sea?

The Italian airpower theorist Giulio Douhet provides a useful reference. In his seminal work, The command of the air, Douhet argued that overwhelming airpower—specifically in the form of strategic bombers—could win a war without requiring boots on the ground. The impact of bombing, including the threat of bombing, could be enough to destroy the will of the enemy to fight.

If we follow Douhet, could an overwhelming demonstration or presence of airpower be enough to win without firing a shot?

No one would argue that three B-2s and six B-52s represent an overwhelming show of force—it’s merely an attention-getter. But the arrival of the long-range bombers from the 509th Bomb Wing is certain to have caught Beijing’s attention.

There is another important factor at play: the location of the US Navy’s 7th Fleet. According to the US Naval Institute, the Ronald Reagan carrier strike group entered the South China Sea on 14 August. This is no coincidence: it’s a clear demonstration of Washington’s displeasure with China’s live-fire exercise. Indeed, the carrier group’s movement can be interpreted as force protection with intent. Put another way—and with echoes from the national defence strategy—the naval force’s arrival signals that the US will protect its assets and allies in the region and that it is not afraid of the consequences that this show of force may elicit from Beijing.

So how does the arrival of long-range bombers on Diego Garcia fit into these events?

The answer is found in another tiny island that hosts a US military base, Guam. In the event of a military conflict with China, the PLA can reach Guam with both cruise and ballistic missiles. This puts the main US airbase in the western Pacific in peril.

Deploying long-range bombers to Diego Garcia and the carrier group into the South China Sea sends a clear message from the US that the Chinese government should not think about attacking Guam. If China makes such a move, the US could launch long-range stealth bombers from Diego Garcia against a range of targets, including the PLA aircraft carrier Shandong, in the South China Sea.

The deployment of B-2s to Diego Garcia is grand strategy in action. The tensions in the region, already high, will be ratcheted even higher as a result of the PLA live-fire exercise. Also in the mix is the announcement that Taiwan’s F-16s have been armed with live Harpoon anti-ship missiles.

Perhaps Douhet was right—the presence of American and allied airpower may be enough to avert a war in the region. The next move as the national defence strategy is brought into action will be fascinating to watch.

This article by Andrew Banfield first appeared in The Strategist on August 21, 2020.