Can Turkey Really Build Its Own Tank? 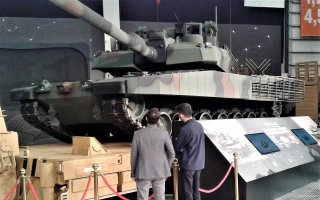 Here's What You Need to Know: Ankara insists the Altay is a fully-Turkish design, but South Korea’s Hyundai Rotem may provide some of the crucial technology.

Turkey’s Altay main battle tank seems to be standard fare in the world of main battle tanks. It sports a 120mm Rheinmetall main gun. It also has a .50 caliber heavy machine gun and a 7.62mm medium machine gun as secondary weapons. It’s 1,500 horsepower engine provides enough output to comfortably propel the sixty-five or so ton tank around. It is even protected by a locally-sourced and developed Roketsan armor package. On paper at least, nothing is amiss.

Due to tensions between Berlin and Ankara as well as a German arms embargo against Turkey, Turkish negotiations with German defense firms soured, sinking plans for the German-designed engine and transmission. Turkey, a non-European Union member, has faced criticism from a number of EU countries due Turkey’s involvement in the Syrian civil war. What exactly will be used in place of the German design remains to be seen.

In 2019, Turkish officials set an ambitious, two year timeline for the Altay program, stating that by 2021, the main battle tank would be fielded. This timeline would now appear to be virtually impossible thanks to Turkish alienation.

Whether or not Ankara can work out the component sourcing for their Altay program, one thing is for certain. Despite strong assertions to the contrary, the Altay won’t be a purely-domestic initiative. Still, if the engine and transmission issue can be rectified, and an adequate armor package sourced, Turkey would be able to have a tank in service that could easily outstrip its older tanks in terms of performance and capabilities. Watch this topic closely for further additional information.