With This Cannon, the Soviet Union Brought Warfare into Space 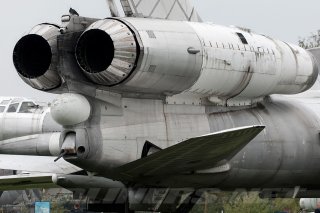 In the decades since the fall of the Soviet Union, many Americans have taken to assuming that victory for the United States was assured. From our vantage point in the 21st century, we now know that the Soviet Union was, in many ways, a quagmire of oppression and economic infeasibility — but in the early days of mankind’s effort to reach the stars, it was the Soviets, not the Americans, who seemed destined for the top spot.

On October 4, 1957, it was the Soviet Union that first successfully placed a manmade object in orbit around the earth, with Sputnik. Less than a month later, the Soviets would capture another victory: Launching a stray dog named Laika into orbit. While the dog would die as it circled our planet, Laika’s mission seemed to prove (at least to some extent) that space travel was possible for living creatures. On September 14, 1959, the Soviet space probe Luna II would be the first manmade object to land on the moon, but the Soviet’s greatest victory was yet to come.

When the Soviets were winning the Space Race

On April 12, 1961, the Soviet Union once again affirmed to the world that they were the global leader in space technology, launching cosmonaut Yuri Gagarin into orbit where he remained for 108 minutes before reentering the earth’s atmosphere.

To the Americans, these early victories in the Space Race were about far more than international prestige. Each victory for the Soviets not only represented a greater lead in securing “the ultimate high ground” for the Soviet military, they also served as proof of the validity of the Soviet Communist economic and political model — making the Soviet space program as much an ideological threat as it was a military one.

Despite assuming an underdog status in the early days of the Space Race, however, the U.S. leveraged its post-World War II industrial and economic might to begin closing the gap created by these early Soviet victories, launching their own satellite less than four months after Sputnik. America’s first astronaut in space, Alan Shepard, would follow behind the Soviet Gagarin by less than a month.

By 1969, America’s technological prowess, coupled with a massive influx of spending, would secure victory for both the U.S. and, in the minds of many, its capitalist economic model. On July 20, 1969, two former fighter pilots, Neil Armstrong and Buzz Aldrin, triumphantly landed on the moon.

Just like that, the Soviets went from leading the way in orbital space to lagging behind, and in the midst of an ongoing nuclear arms race, the Soviets saw this shift as a significant threat. Furthering their concern were reports of the American Manned Orbital Laboratory (MOL) program, which was intended as an early space station from which crews could conduct orbital surveillance, or even mount operations against Soviet orbital bodies.

In response to the MOL program, the Soviets poured funding into Almaz, which was an early space station design of their own. Hidden behind a public-facing civilian space station effort, the program called for a number of military-specific space stations in orbit around the earth, each capable of conducting its own high-altitude reconnaissance. Although the Americans canceled their MOL program in 1969, the Soviet effort continued, reaching even further beyond America’s canceled program with plans to equip these space stations with the world’s first ever cannon in space.

The Soviets were not mistaken when they considered America’s MOL program a threat. In fact, within the corridors of the Pentagon, a number of plans and strategies were being explored that would enable the Americans to spy on, capture, or otherwise destroy Soviet satellites.

It was with this in mind that the Soviet Union decided they’d need to equip their space stations for more than just taking pictures of the earth below. Instead, they wanted to be sure their orbital habitats could fight whatever the Americans threw their way.

The decision was made to base this new secret space cannon on the 23-millimeter gun utilized by their supersonic bomber, the Tupolev Tu-22 Blinder. For its new purpose as the world’s first true space cannon, the Soviet government looked to the Moscow-based KB Tochmash design bureau responsible for a number of successful aviation weapons platforms.

Engineer Aleksandr Nudelman and his team at KB Tochmash changed the design of the cannon to utilize smaller 14.5-millimeter rounds that could engage targets at distances of up to two miles with a blistering rate of fire of somewhere between 950 and 5,000 rounds per minute (depending on the source you read). According to reports made public after the fall of the Soviet Union, the cannon successfully punctured a metal gas can from over a mile away during ground testing.

The cannon was to be mounted in a fixed position on the underbelly of the Soviet Almaz space stations, forcing operators to move the entire 20-ton station to orient the barrel toward a target. The weapon system was first affixed to a modified Soyuz space capsule, which was then dubbed the “Salyut” space station, and launched in 1971. By the time the Salyut was in orbit, however, interest in these manned reconnaissance platforms was already beginning to wane inside the Kremlin, as unmanned reconnaissance satellites seemed more practical.

The only cannon ever fired in space

While American intelligence agencies were well aware of the Soviet plan to field military space stations, it was still extremely difficult to know exactly what was going on in the expanse of space above our heads. Under cover of extreme secrecy, the Soviet Union successfully completed a test firing of the R-23M on Jan. 24, 1975 in orbit above the earth. There was no crew onboard at the time, and the exact results of the test remain classified to this day. Uncomfirmed reports indicate that the weapon fired between one and three bursts, with a total of 20 shells expended. In order to offset the recoil of the fired rounds, the space station engaged its thrusters, but it stands to reason that the test may have been a failure.

In fact, any footage of the test firing of the weapon was lost when the Salyut 3 platform was de-orbited just hours later, burning up upon reentry into the earth’s atmosphere. When the Soviet Union designed an upgraded Almaz space station for future launches, they did away with cannons in favor of interceptor missiles — though the program was canceled before any such weapons would reach orbit.