Caught On Tape: This Footage of the F-35 Is Sure to Impress 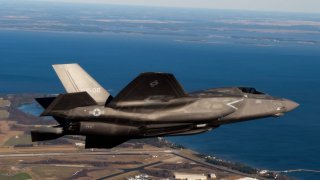 Here's What You Need to Remember: The videos, first posted to Instagram, show snippets from one of Olson’s training session at Luke Airforce Base (AFB) in Arizona. The first video shows Olson approaching from the left, flying straight up in what is vaguely reminiscent of the first half of a stall turn; but then, Olson pulls back and executes a remarkably tight loop before descending in a slow, flat spin.

Mark Episkopos is a frequent contributor to The National Interest and serves as a research assistant at the Center for the National Interest. Mark is also a PhD student in History at American University. This first appeared earlier and is being reposted due to reader interest.