Is CBD Just a Scam? Here Is What the Data Says. 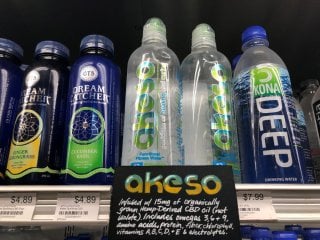 Many people have turned to cannabis and its derivatives as they search for pandemic relief, and one of the most widely available ones is CBD. It is also legal. You can buy oils, tinctures, capsules, gummies, cosmetics and even toilet paper said to contain the molecule. Martha Stewart has a line of CBD products, and some companies are marketing CBD products for holiday gifts. And, you can even buy CBD products for your pet.

An investment bank has estimated that this market will be worth US$16 billion by 2025, even though many of the products that allegedly contain CBD may not contain any CBD all. And, if they do, the amount often is far less than the amount stated on the product bottle or box.

The CBD craze started in 2018, after the U.S. Food and Drug Administration approved Epidiolex, the first drug containing CBD, used to treat two rare and severe types of childhood epilepsy. Since that approval, research on the possible medical applications of CBD has risen sharply.

But while the ads boasting its benefits are ubiquitous, there is still much we scientists don’t know, including whether CBD can actually reduce stress and anxiety.

That said, as a neuroscientist who studies childhood anxiety disorders and the neurobiology of stress and anxiety, I am encouraged by some of the preliminary research. For example, pre-clinical studies show that CBD can reduce fear and anxiety-related behaviors in mice. Neuroimaging studies in humans show that CBD can reduce activity in the amygdala and anterior cingulate cortex, brain regions associated with stress and anxiety. Yet more research must take place before we can be certain.

CBD is only one of more than 100 cannabinoids and other molecules found in the marijuana plant (Cannabis Sativa). Cannabinoids are known as signaling molecules: They interact with other molecules in the body, including the brain. For example, THC, the plant’s most abundant cannabinoid, interacts with brain receptors to cause the “high” feeling. Cannabinoids can also impact the immune system; this may help alleviate inflammation, arthritic conditions and neuropathic pain.

CBD, the plant’s second most abundant cannabinoid, does not contain THC, and therefore does not have psychoactive effects. There is no high. CBD also doesn’t seem to bind strongly with typical cannabinoid receptors. Instead, it interacts with other signaling molecules in the brain and throughout the body. For example, CBD may act on the serotonin system, particularly serotonin 5-HT1A receptors, which are involved in signaling pathways that regulate pain, depression and anxiety.

Evidence suggests that CBD may interact with the body’s own natural cannabinoid system – the endocannabinoid system – to boost levels of anandamide, the “bliss molecule,” our body’s natural version of THC, perhaps changing the way people think and feel. And CBD may act with the body’s natural opioid system. This would explain some of the reported pain-relieving qualities. Yet with all of these potential effects, we still don’t understand how CBD works to alleviate pain, anxiety, inflammation and even epilepsy, the only disorder for which a drug containing CBD has been FDA-approved.

In medicine, to see if something works, a randomized placebo-controlled trial is the gold standard. Several clinical trials are underway to see if CBD works for anxiety, COVID-19-induced stress, and for the treatment of anxiety disorders – worldwide, the most common mental disorder. There are several types of anxiety disorders, including generalized anxiety, which relates to excess worrying about everyday life, and social anxiety disorder, which includes intense fear around social interactions. Symptoms of anxiety can also vary, including feeling tense, irritable or jumpy, and also feeling that your heart is racing, sweating, headaches, stomachaches and insomnia.

Preliminary and recent studies on the potential for CBD to reduce stress and anxiety are promising. Two small preliminary studies, for instance, tested whether CBD reduced anxiety in individuals with social anxiety disorder and in healthy volunteers. A public speaking test was simulated; those given CBD reported lower anxiety compared to those given a placebo (sugar pill). But we must wait for results of larger clinical trials to know if CBD works, and under what conditions.

In November, voters in four states – Arizona, Montana, New Jersey and South Dakota – voted to join 11 other states to legalize recreational cannabis use in the U.S. But the rise in legalization and decriminalization of cannabinoids, along with their widespread popularity, significantly outpaces the science. There is more research today on the potential medical applications of cannabinoids than ever before – including $196 million from the National Institutes of Health, along with $31 million on CBD in the year 2020.

Still, this is a relatively new area of medical research. CBD was discovered in 1940; the body’s own endocannabinoid system wasn’t discovered until 1992. This is shocking given that humans have been using cannabis and cannabis-based products for thousands of years. Evidence suggests medical use of cannabis dates back to ancient times, including around 2700 B.C., when Emperor Shen Nung – known as the father of Chinese medicine – was exploring cannabis use to treat over 100 different ailments, including gout, rheumatism and malaria.

But today, doctors, nurses and other medical providers are generally not well prepared to answer patients’ questions about potential risks, benefits and applications. This may be because cannabis and CBD are not a part of standard medical education. For example, a 2017 survey of medical residents and fellows in St. Louis found that 84.9% reported receiving no medical education about cannabis.

Government restrictions also contribute to the lag. Cannabis is still illegal at the federal level. In 2016, the U.S. Drug Enforcement Administration affirmed its classification of cannabis as a Schedule I drug. That put it in the same category as deadly and addictive drugs: opioids (like heroine and oxycodone). This is in stark contrast to research that shows cannabis is relatively safe and with a low potential for abuse. But because of this federal classification, scientific and medical study of cannabis is tightly regulated. Researchers need a special license from the DEA to study it. Physicians may also feel poorly trained because more and higher-quality research is needed before they make recommendations to their patients. Researching CBD and other cannabis derivatives is also difficult. CBD products are currently unregulated by the U.S. Food and Drug Administration. This means CBD is not considered a dietary supplement, and marketed CBD products cannot make any health-related claims. This also means there’s no oversight on what’s in CBD products, which is why they are frequently mislabeled. This creates a “Wild West” environment for consumers.