Check Out Russia’s T-15: A Troop Transport Made From a Tank Hull 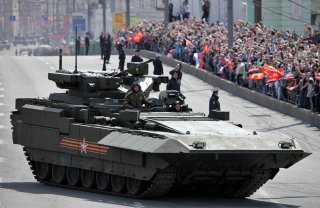 Here's What You Need to Remember: As a troop transport, the T-15 is unusually heavy, and at forty-eight tons it is actually heavier than any serving Russian tank other than the T-14. It even weighs slightly more than the T-90 tank, which remains the frontline armored vehicle of the Russian Army.

While both are based on the same Armata chassis, the T-14 main battle tank has routinely been in the spotlight whether for its latest improvements that could allow it to be remotely operated or if one was even destroyed in Syria. However, far less has been noted about the T-15 armored fighting vehicle, which could be a significant component to the Russian Army.

It could even have as much effect on the Russian military as its heavier sister platform.

The T-15 was designed primarily as a transport and could carry a dozen soldiers including three crewmembers. However, it was not quite an armored personnel carrier (APC)—such as the U.S. military’s Cold War-era M113 (APC) or newer Armored Multi-Purpose Vehicle (AMPV)—but not exactly an update to its BMP-3M infantry fighting vehicle (IFV), which is the latest update to a platform dating back to the early 1960s.

This vehicle exists somewhere between an APC and IFV. There is no NATO vehicle that is comparable to the T-15 and the closest equivalent could arguably be the Israeli-built Merkava, which is essentially a heavy tank that can also carry troops. In the case of the T-15 however, it is far more of a heavily armed and armored troop carrier.

The keyword could be heavy—in both cases.

As a troop transport, the T-15 is unusually heavy, and at forty-eight tons it is actually heavier than any serving Russian tank other than the T-14. It even weighs slightly more than the T-90 tank, which remains the frontline armored vehicle of the Russian Army. This is because the T-15 shares the same Armata chassis as the T-14, which is about as beefy as they come today.

Unlike the true tank version of the Armata platform, the T-15 features a remote-controlled Bumerang-EM/Empoch turret that is placed at the back of the tank, while the engine is situated at the front of the vehicle. This has the added benefit of allowing the engine to shield the passengers from hits to the front.

The platform’s primary armament is a Shipunov 2A42 30-millimeter autocannon, while secondary armament consists of a dual bank of Kornet anti-tank missiles and a 7.62 PKMT machine gun. The “fire and forget” missiles are capable of defeating reactive armor and active protection systems. These use technical vision with an automatic target tracker, which makes it five times more likely to accurately hit a target at ranges from 150 to 10,000 meters.

This mix of weapons, along with the fire and forget ability, actually allows the T-15 to fire at multiple targets simultaneously. The T-15 can carry a total of 500 rounds of ammunition including 160 armor-piercing and 340 high-explosive fragmentation rounds.

Russian deputy defense minister Alexei Krivoruchko announced in August 2018 that a contract on 132 T-14 tanks and T-15 infantry fighting vehicles based on the Armata combat platform had been signed—but how many of each was unclear, but deliveries of both have been repeatedly delayed and according to state media troops wouldn’t even get the first tanks until 2021. It isn’t known when deliveries of the T-15 would begin.

However, both platforms were demonstrated to potential foreign buyers at Army-2020 international arms show last month.

This past winter, Georgy Zakamennykh, CEO of the Burevestnik Central Research Institute, which is part of Uralvagonzavod manufacturer within the state hi-tech corporation Rostec, also told Tass that the T-15 Armata heavy infantry fighting vehicle with the latest AU-220M combat module.

According to information from the Uralvagonzavod press office, the AU-220M is an unmanned cannon and machine-gun module. It was designed to serve as the armament for various combat vehicles infantry fighting vehicles already in operation as well as new platforms such as the T-15.

The AU-220M has a firing range of up to 14.5 kilometers with a maximum rate of fire of eighty rounds per minute. Ammunition load typically includes eighty unitary fifty-seven-millimeter munitions including multifunctional remote-controlled, armor-piercing and guided projectiles, which allows effectively striking small-size unmanned aerial vehicles, low-flying aircraft and helicopters, and also land-based light-armored hardware and field fortifications.

However, it remains unclear when the first T-15s to feature the AU-220M combat module will be deployed or for that matter if the hybrid APC/IFV will be rolling out even next year.