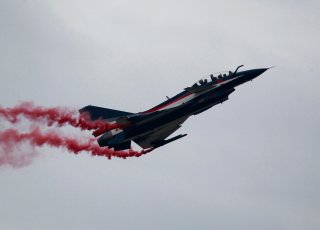 Primarily a mainland defense force for much of its existence, the People’s Liberation Army Air Force (PLAAF) launched a wide-ranging modernization effort in the 1990s to more effectively project air power across the Asia-Pacific region and beyond.

Though Beijing continues to face an uphill climb in its effort to catch up to its US and Russian counterparts, there is little question that the PLAAF’s modernization program has made massive strides over the past decades.

China’s workhorse fighter, the J-10 was conceived in the late 1980s to compete with the likes of Russia’s Mikoyan MiG-29 and the US F-16. In fact, the J-10 is, in many ways, China’s F-16: a cheap, reliable, and versatile multi-role fighter. In its latest J-10C incarnation, the fighter features a digital glass cockpit, expansive armaments suite, beyond-visual-range targeting capabilities, and a fly-by-wire control system for superb agility. With over 430 models currently in service, the J-10 remains the PLAAF’s most prolific fighter.

The PLAAF’s Su-27 derivative, the J-11 is by far China’s most numerous air superiority fighter. Though the original J-11 was more or less a carbon copy of the Su-27, the later J-11B and its sub-variants integrated numerous domestically-produced Chinese internal components. In keeping with its Soviet pedigree, the J-11 is a heavy, but relatively maneuverable fighter capable of carrying and efficiently delivering a sizable payload. There is reportedly a modernized J-11D variant in the works, boasting a new fly-by-wire system and a host of practical avionics improvements.

The H-6 is China’s mainline strategic bomber, roughly in line with the capabilities of the 1950’s US B-52. What makes the H-6 special is not so much its performance—as it barely even manages to trade blows with the B-52– but its remarkable long-livedness, generating over a dozen variants the course of the twentieth century. The H-6K is the bomber’s most comprehensive refit yet, boasting new D-30KP engines, LCD display glass cockpit, and a heavier payload. A ballistic-missile launching H-6N variant has reportedly begun to enter service as of 2019.

One of China’s most capable fighters is a Russian import. Purchased by Beijing in 2015, the Su-35S has its distant roots in a Soviet project to create an advanced Su-27 variant. The Su-35S is widely regarded as Russia’s best and most versatile air superiority fighter, blending a top-performing aerodynamic design with modernized avionics, robust targeting systems, and expansive weapons suite. The PLAAF currently operates twenty-four Su-35 models and, as of May 2020, is reportedly considering ordering another batch of the advanced Russian fighter.

The PLAAF's first fifth-generation fighter, the J-20 entered service (albeit with weaker pre-production engines) in 2017. The J-20 is generally understood as an advanced air superiority fighter with secondary precision deep strike capabilities, featuring PL-15 long and PL-10 short-range air-to-air missiles, as well as thrust-vectoring and a slew of design features to substantially reduce radar cross-section. The J-20 entered serial production earlier this year under the J-20B designation, although models with the planned, powerful WS-15 engine are reportedly still several years away.