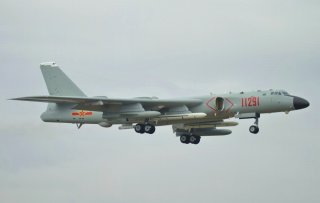 Here's What You Need To Remember: While the H-6K doesn’t have the global legs of a U.S. B-52 bomber, it doesn’t need them. For now, China is content to project power into its nautical backyard and over adjacent areas that it considers crucial, such as the South China Sea, Taiwan and Japan.

China’s H6-K may be an old Soviet-designed bomber—but it’s getting twenty-first century missiles.