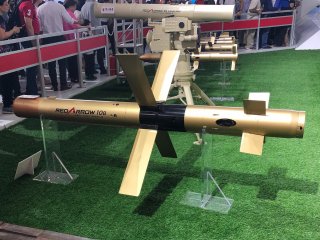 Here’s What You Need to Remember: The HJ-8 is a reliable system, but no longer at the cutting edge of antitank technology. It could probably be shot down by the Active Protection Systems on tank such as Israeli Merkava or the Russian T-14. The Red Arrow 8 might also struggle to penetrate the frontal composite armor of top Western main battle tanks like the M1 Abrams.

China has developed a formidable domestic arms industry, but most of the Chinese weapons that have actually been used in combat are copies of older Soviet systems, such as the Type 59 tank (based on the T-54), the J-7 fighter (the MiG-21) and the H-6 bomber (the Tu-16). However, the HJ-8 antitank missile is a rare example of an indigenous Chinese design that has seen action across the globe, and had a notable impact on battlefields in Bosnia in the 1990s and Syria today.

The HJ-73, China’s first domestically produced antitank missile, was basically a copy of the Russian AT-3 Sagger, which gave Israeli tanks a nasty shock in the opening days of the Yom Kippur War. However, Chinese ties with the Soviet Union deteriorated gravely during the 1960s and Beijing decided it wanted a genuinely domestic design for a successor.

Like the TOW, a Red Arrow 8 missile is connected to its launch unit by a wire. The gunner simply needs to keep the electro-optical sight trained on the target while the missile is in flight, and the semiautomatic guidance system helps correct the missile’s flight path. The missile’s solid-fuel rocket motor is not particularly fast, with a maximum speed of 220 meters a second, meaning it could easily take twelve or more seconds to strike targets at its maximum range.

The Red Arrow is considered fairly accurate, and its wire guidance system is intrinsically immune to electronic countermeasures. However, the firer must remain stationary, guiding the missile until it hits the target. The missiles kick up a lot of dust at launch, giving enemy troops a chance to spot and fire at the launch unit, destroying it or suppressing it before it can hit the target.

Early Red Arrow missiles had a range of three kilometers and their 120-millimeter shaped charges had a penetration equivalent to eight hundred millimeters of Rolled Homogenous Armor (RHA). However, HJ-8 has seen a lot of upgrades over the years. The HJ-8C and D versions introduced a tandem charge designed to defeat the Explosive Reactive Armor common on Soviet and Russian tanks, a feature retained in later models.

The principle contemporary variant is the HJ-8E, which has a thermal imaging system, a range of four kilometers, and reported penetration of one-thousand-millimeter RHA. A new HJ-8L launch unit has miniaturized circuitry to reduce its weight to fifty pounds, so it can serve as a truly man-portable weapon. Finally, there is also a longer-range HJ-8H that can strike targets up to six kilometers distant, including helicopters. Specialized HJ-8F bunker busters with thermobaric warheads and HJ-8S anti-shipping missiles also exist.

The Red Arrow is the most widespread antitank system in the People’s Liberation Army. As an infantry weapon, the four-part system is fired from a heavy tripod. However, it is also mounted on infantry fighting vehicles, wheeled APCs and attack helicopters.

Beijing has extensively exported the missiles to nearly twenty countries in Asia, Africa and South America. Egypt, Sudan and Pakistan also produce the weapon under license. Pakistan has produced around twenty-three thousand of its own Baktar-Shikan variant, mounted on Land Rovers, APCS and even AH-1 Cobra attack helicopters bought from the United States.

The Red Arrow was first used in action by Bosnian fighters facing Serbian armor in the early 1990s. Reportedly supplied by Pakistan despite a UN arms embargo, the Red Arrows were filmed knocking out numerous T-55 and M-84 tanks (the latter a Yugoslav derivative of the T-72), as well as BMP-1 infantry fighting vehicles, and were credited with blunting Serbian armored offensives in the Battles of Stup in 1992 and Tesanj in 1993.

Since 2013 there have been dozens of videos of Syrian FSA rebels using HJ-8Es to blow up Syrian Arab Army T-72, T-62 and T-54 tanks, 2S1 and 2S3 self-propelled howitzers, machine gun nests, BMP-1 infantry fighting vehicles, and even landed helicopters. These weapons appear to be Sudanese-manufactured, and were possibly supplied by Qatar.

All in all, the videos suggest that somebody supplied a lot of HJ-8s to the rebels in 2013, and that they were fairly effective in combat. However, the sharp drop-off in HJ-8 videos in the last several years may indicate that the weapon shipments were not continued.

Red Arrows have also been recorded in use by Kurdish peshmerga troops in Iraq in 2014, and were reportedly acquired by Wa rebels in Myanmar.

The HJ-8 is a reliable system, but no longer at the cutting edge of antitank technology. It could probably be shot down by the Active Protection Systems on tank such as Israeli Merkava or the Russian T-14. The Red Arrow 8 might also struggle to penetrate the frontal composite armor of top Western main battle tanks like the M1 Abrams. Intriguingly, a video shows PLA troops testing an HJ-8 on one of their own Type 96 tanks, which benefit from modern composite armor. It appears to survive the missile impact reasonably well.

Nonetheless, the HJ-8 has proven quite effective at destroying older tanks and armored fighting vehicles which remain in widespread use across the globe. Meanwhile, the PLA has introduced the harder-hitting laser-guided HJ-9 missile, and the top-attacking HJ-12, the Chinese equivalent to the deadly Javelin missile.