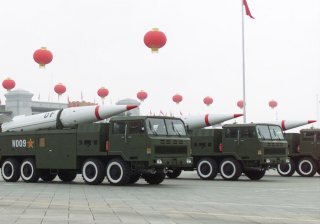 Here’s What You Need to Remember: All of these weapons reinforce the concerns listed in the report, which is that China aims to overcome and destroy the U.S. Navy ballistic missile defenses. A hypersonic glide vehicle or long-range anti-ship missile would introduce the possibility that ship-based Aegis radar systems could be attacked, jammed or overwhelmed by Chinese attacks.

Recently, China has successfully tested its Dong Feng-17 (DF-17) hypersonic glide vehicle, according to a Defense Department report on Military and Security Developments Involving the People’s Republic of China.

“The DF-17 passed several tests successfully and is deployed operationally,” according to the report. “While the DF-17 is primarily a conventional platform, it may be equipped with nuclear warheads.” The report shows that the glide vehicle was built to attack foreign military bases and fleets in the Western Pacific region. This would suggest that it will be primarily used for conventional warfare. Still, a nuclear-armed hypersonic glide vehicle would introduce a new threat for U.S. and allied forces operating in and around the Pacific Ocean. An attack weapon traveling at hypersonic speeds within the Pacific region seems nearly impossible to defend. Commanders within the Pacific region would have little to no time to track an approaching hypersonic attack, intercept it, and launch a counterattack. While the United States does have some Patriot Missiles and Terminal High Altitude Area Defense interceptors, they simply might not be fast enough to stay on track targeting a hypersonic glide vehicle.

The Dong Feng-26 (DF-26) anti-ship missile is also slated to be nuclear-capable, according to the report. This weapon has gained notoriety for being nicknamed a “carrier killer” weapon—a name that comes from how its missiles can travel as far as two thousand miles to hit a U.S. Navy carrier operating at safe standoff distances from the shore.

“The multi-role DF-26 is designed to rapidly swap conventional and nuclear warheads and is capable of conducting precision land-attack and anti-ship strikes in the Western Pacific, the Indian Ocean, and the South China Sea from mainland China,” according to the report.

A companion Chinese weapon, known as the DF-21D, can also reach long distances in the range of one thousand miles. It can strike moving ship targets at sea such as carriers and other large U.S. Navy warships.

All of these weapons reinforce the concerns listed in the report, which is that China aims to overcome and destroy the U.S. Navy ballistic missile defenses. A hypersonic glide vehicle or long-range anti-ship missile would introduce the possibility that ship-based Aegis radar systems could be attacked, jammed or overwhelmed by Chinese attacks.