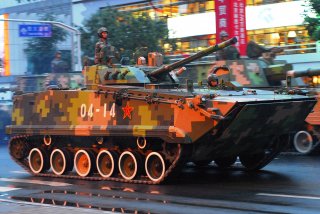 Here’s What You Need to Remember: Although some elements of quasi-Hong Kong society autonomy might arguably still exist, China’s repressive political forces have essentially eradicated most of it. This indicates that there are limited prospects for a more tranquil or harmonious or collaborative “one-country, two-systems” approach in Taiwan.

China’s more aggressive posture toward Taiwan may reflect a shift from its previous position that re-unification could become a “one country, two systems,” status quo, according to the Defense Department’s 2021 report on China.

People’s Republic of China’s (PRC) leaders are now more likely to favor a much more forceful power position including large-scale domination of Taiwan and its institutions as opposed to considering the possibility that Taiwan’s basic societal structure could stay “in-tact” in the event of unification.

“PRC leaders may perceive a closing window of opportunity to subjugate Taiwan under the pretenses of Beijing’s “one country, two systems” framework,” according to the Defense Department’s report on Military and Security Developments involving the People’s Republic of China.

Chinese leaders explained the concept of “one country, two systems” in 2019. The idea behind it was that China-Taiwan unification could entail the “protection” of Taiwan’s social system, way of life, private property, religious beliefs, and “lawful rights and interests,” provided the PRC’s “sovereignty, security, and development interests,” are ensured.

Building upon this idea, Chinese leaders have called for “cross-strait” talks. The report shows that recent public opinion polls in Taiwan reveal that its citizens are moving away from their supportive stance toward Beijing. This is part of the reason for the change.

Many people are likely familiar with the increase in Chinese military exercises near Taiwan, which include flybys, aircraft carrier attack operations and amphibious assault preparation drills. Fewer people are likely familiar with the previously entertained possibility of a softer, more collaborative unification. A “one-country, two-systems” approach that preserves much of Taiwan’s structural, political and cultural autonomy does not seem very feasible anyway, given China’s well-known ambitions.

In recent decades, the Chinese communist party’s actions in Hong Kong have indicated that Beijing is unlikely to permit any kind of “two-systems” of Taiwanese autonomy under Chinese leadership. For decades, China has championed and pursued what could be called a large-scale migration toward limited, semi-private enterprise and business growth within the parameters of government involvement. This would enable economic growth while preserving repressive social and political controls. However, China’s human-rights record and repressive political positions don’t seem to reflect this approach.

Although some elements of quasi-Hong Kong society autonomy might arguably still exist, China’s repressive political forces have essentially eradicated most of it. This indicates that there are limited prospects for a more tranquil or harmonious or collaborative “one-country, two-systems” approach in Taiwan.

“The PRC has increasingly resorted to an aggressive pressure campaign against Taiwan and the Tsai administration to curtail Washington-Taipei ties and deter Taiwan independence,” according to the report.