China’s New Fighter Jet Is a Problem for Australia 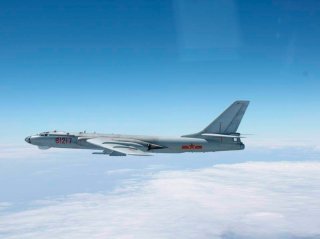 Every year, the International Institute for Strategic Studies publishes a thorough assessment of the capabilities and defence economics of militaries around the globe. The 2020 edition of The military balance covers 171 countries and provides a disconcerting deep dive into Chinese military technology.

The IISS’s sober analysis of the People’s Liberation Army Air Force’s stealthy new fifth-generation J/H-XX jet adds substance to what had been only educated guesswork in a number of forums. So, what does the development of this sophisticated aircraft mean for Australian operations risks in the 2020s?

The IISS notes that the J/H-XX is a fighter bomber, an old term for multirole combat aircraft, but what stands out is that it’s capable of carrying long-range air-to-air missiles. It suggests the platform is connected to the PL-15 beyond-visual-range air-to-air missile, or BVRAAM, and potentially an even longer range ramjet-powered hypersonic PL-21 missile. Sources suggest the PL-15 is already in service with a range of 200 kilometres, while the longer range PL-21 is still in development and may have a range up to 400 kilometres.

The function of these weapons, whether launched from a J/H-XX or the J-20 already in service, is to attack vital platforms such as airborne early warning and control aircraft and air-to-air refuellers. For example, in attacking a carrier battlegroup as part of an anti-access/area-denial operation, a key goal would be to destroy E-2C Hawkeye early warning aircraft. That would force the carrier taskforce to use ship-based radar in active mode, allowing long-range anti-ship missiles, both ballistic and cruise, to target it more easily.

Australia lacks a long-range strike capability and is dependent on either forward-based tankers and aircraft operating in uncontested airspace or forward support hosted by a nation closer to the action. Neither of those options is assured in a future conflict with an adversary such as China. If the PLAAF were to shoot down the RAAF’s E-7A Wedgetails and KC-30 tankers at the start of a conflict, our strike and air combat capability would be rendered ineffective.

The J/H-XX should be a concern to RAAF planners. A 2018 report in The Diplomat discussed both the H-20, a new strategic bomber in development for the PLA Air Force, and the ‘regional fighter bomber’—the J/H-XX. It noted that the first information on the J/H-XX emerged in 2013 in the form of a model of a new combat aircraft . It was presumed to have supersonic performance with a combat radius of up to 2,000 kilometres and to be able to carry BVRAAMs within side weapons bays. It appeared to be designed to be stealthy, with a design reminiscent of the US YF-23 Black Widow fighter. The article suggested that:

Such an aircraft would leverage a combination of stealth, speed, [and] onboard electronic warfare capabilities, to penetrate well monitored and defended airspace to target high value targets … Potential targets may include anything from carrier strike groups … to well defended airbases and radar sites … The aircraft’s large internal payload capacity and side BVRAAM bays may also hint at a secondary long range, high persistence interceptor role.

The article speculated that the J/H-XX’s secondary role as a long-range, high-persistence interceptor involve equipping it with PL-15s or even PL-21s. It concluded that the J/H-XX either wasn’t being pursued or wasn’t at an advanced stage of development.

Yet the 2019 China military power report by the US Defense Intelligence Agency suggested that the J/H-XX was in development, and now the 2020 IISS report supports this. The DIA report noted that:

The PLAAF is developing new medium- and long-range stealth bombers to strike regional and global targets … which probably will reach initial operational capability no sooner than 2025. These new bombers will have additional capabilities, with full-spectrum upgrades compared with current operational bomber fleets, and will employ many fifth-generation fighter technologies in their design.

The report noted in a table that the ‘tactical bomber’, classified as a ‘fighter bomber’, would carry advanced electronic scanned array radar, long-range air-to-air missiles and precision-guided munitions.

This suggests China recognises the value of long-range airpower not only for strike but also for offensive counter-air operations. It’s a return to the interceptor concept that disappeared in the 1980s, when the RAF’s Tornado F-3 ADV served as the last true interceptor aircraft in Western air forces. The Soviets persisted with interceptors with the MiG-25 Foxbat and Russia sustains its MiG-31 Foxhound fleet even now. So it’s interesting that China is developing an aircraft that can be a multirole platform that would bring back long-range air defence—an interceptor by any other name—for both offensive and defensive application.

If the J/H-XX becomes operational later this decade, it will give the PLAAF the ability to undertake offensive counter-air operations directly against Australia’s air approaches north of Darwin. Operating from Chinese military bases on disputed territories in the South China Sea, PLAAF J/H-XXs equipped with PL-21 BVRAAMs could hold at risk RAAF aircraft over the Molucca and Banda seas. RAAF tankers operating out of Tindal would be at immediate risk, as would the Wedgetails.  Sustaining a combat air patrol to defend those vital combat enablers would become a logistical nightmare, so the safer option would be to simply not fly them. That would leave our F-35 fighters, F/A-18F Super Hornets and EA-18G Growlers operationally constrained.

To defeat the prospective threat posed by PLAAF strategic airpower, including the potential challenge posed by the J/H-XX operating in a long-range offensive interceptor role, we’d need longer range airpower ourselves. Sadly, that’s what’s missing in Western air forces—a mid-range capability between tactical fighters and strategic bombers. But not, it would seem, in the PLAAF.