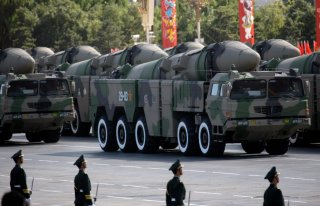 Here’s What You Need to Remember: The acting director of the NCSC, Michael Orlando, told reporters in a rare press conference that the United States could “not afford to lose” the race to develop new technology with China.

Officials at the U.S. National Counterintelligence and Security Center (NCSC)  warned on Friday that China’s pursuit of artificial intelligence (AI) technology could have major implications for the future of the military and economic competition between the two nations. Among other topics, the warnings restated the U.S. warning against private companies in key areas allowing Chinese investment or expertise, urging them to take significant precautions in protecting their intellectual property.

Under the Trump and Biden administrations, relations between Washington and Beijing have steadily become more acrimonious, with increasing consensus from America’s national security agencies that China represents a strategic threat to the United States. Although Biden has made statements advising against the creation of a “new Cold War” with China, and advocated in favor of working together on mutual concerns such as climate change, relations have still remained tense—particularly since the onset of the coronavirus pandemic, when the United States reproached China over for its failure to share certain information about the virus’s origins. For its part, Beijing has accused Washington of acting in bad faith.

Artificial intelligence has taken on a particularly prominent role in the Chinese government, which has pushed it, along with other high-tech industries such as robotics, as part of its “Made in China 2025” development strategy. It is beyond dispute that much of the know-how for these projects was obtained, licitly or illicitly, from the United States, which by the Trump administration’s estimate loses $600 billion of intellectual property to China each year.

The acting director of the NCSC, Michael Orlando, told reporters in a rare press conference that the United States could “not afford to lose” the race to develop new technology with China in key high-security areas, including AI technology, quantum computing, and semiconductor development.

Orlando, however, stopped short of advising businesses to ban Chinese investment or recommending other policies to reverse the loss of intellectual property.

One area of particular concern to the NCSC has been biotechnology and pharmaceuticals, where China has made considerable acquisitions in the past two years. The agency has warned that Chinese-linked firms in the United States benefit from American medical data, which is returned to Beijing.

Orlando underlined that these developments had to be understood as part of Beijing’s desire to expand its technical knowledge, rather than the initiative of individual Chinese corporations, which were subservient to the state.