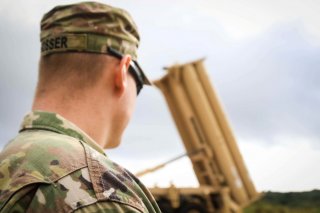 As of last week, the U.S. House's Appropriations Committee intends to cut funding for Guam's missile defenses, even as it approves a funding increase for the Missile Defense Agency.  This demonstrates a deep degree of strategic confusion and threatens to undermine deterrence in an increasingly unstable Western Pacific. U.S. military ports, airfields, and logistics facilities are essential to America's existence as the dominant Pacific power. Their effective defense requires a far more advanced command and control system than currently exists. It demands more—not less—funding—and U.S. policymakers should understand why.

The U.S.' competition with China is primarily political-strategic, not an economic, diplomatic, or ideological contest.  The CCP has employed every element of national power at its disposal to gain an advantage, joining major international organizations like the WHO and co-opting them to bully China's rivals, stealing technology to increase Chinese productivity at America's expense, using coercive economic inducements to expand its influence in Central Asia, the Near East, Africa, and Southeastern Europe, and wielding the Party-State's media complex to propagate anti-Western ideological narratives.  But each of these actions is meant to bolster Chinese military power and facilitate the CCP’s strategic objectives.

China cannot simply await economic primacy.  As of the 18th National Congress in 2012, during which Xi Jinping ascended to paramount leadership, the CCP's leaders have recognized the dangers of hoping to accrue economic power and "outbuild" the United States.  The liberalization that sparked Chinese economic growth from the 1980s to the 2010s did create the foundation for contemporary Chinese power.

But it also created separate influence spheres, those “corrupt” Party officials and their friends throughout the Chinese economy that Xi Jinping has purged throughout his near-decade in power.  State-directed development – and we must be clear, the Chinese "socialist market economy" is an oligarchic hybrid system with major elements of central planning – contains inherent inefficiencies.  And it remains an open question as to whether it will be able to deliver the rising living standards that the Chinese people accepted in exchange for the post-Mao CCP’s continued rule.  Xi clearly doubts its ability to do so.  Hence his accelerating internal consolidation and international aggression, first prosecuting a genocide against Muslims in Xinjiang, then staging a de facto coup in Hong Kong, and increasingly preparing for an invasion of Taiwan.

The United States is the greatest impediment to China’s strategic ambitions.  Subduing Taiwan, while the first step in Chinese military strategy, is not enough.  The PLA must then pressure the U.S.' Pacific allies, most likely the Philippines, Japan, and, if possible, Australia, and ideally forcing a confrontation under cover of the PLA's ground-launched anti-ship missiles.  If the CCP can fracture the U.S.' regional alliance system, the U.S. will be forced to conduct an extended blockade 9,000 miles from its coastline with few to no regional bases.  By contrast, if U.S. power remains relevant in the Pacific, and if its formal allies commit to confronting China alongside it, the PLA faces a much less favorable balance of forces, even if it can neutralize Taiwan with negligible air and naval losses.

American force structure is optimized for a specific sort of engagement.  Given current global commitments, it fields a small number of high-technology ships embodied in the U.S. Navy's eleven Carrier Strike Groups, only three to four of which operate at any given time.  Support facilities for all services are concentrated in a handful of "superbases," massive joint installations like Yokosuka Naval Base near Tokyo and the U.S.' base complex on Okinawa.  This approach was reasonable when no adversary could target these bases directly: concentrating logistics and supply facilities, airfields, and barracks in a handful of locations enabled more efficient and cost-effective combat support.  However, these superbases are now targets for Chinese attacks.  If China can neutralize one of these major facilities, it can disrupt U.S. force coordination throughout the broader region, even simply by destroying airfields, port facilities, and storage depots.

Bases like Kadena and adjacent Marine air installations on Okinawa field a significant portion of the U.S.' regional air combat capacity.  Given its proximity to the Chinese coastline, Okinawa is a likely target.  Naturally, attacking a U.S. facility would be a sharp escalation.  But depending upon the balance of forces and the perceived possibility of U.S. intervention, the PLA may be tempted to strike a major US base as a conflict begins.

While the focus remains on bases like Kadena, the PLA may target installations further from the Chinese mainland that plays an equally important role in American regional strategy.  Foremost among these are the U.S. bases on Guam.  The Joint Region Marianas includes two critical installations, the U.S. Air Force's Andersen Air Force Base and the U.S. Navy's Naval Base Guam.  Andersen is a support facility housing no permanent combat units.  But the Eleventh Air Force's 36th Wing is charged with scaling up operations with short notice, fielding Air Force "surge" units like the B-1 Lancer bombers that deployed Guam last summer.  If the U.S. Air Force is to reinforce the Pacific, it must use Guam as a staging point.

Naval Base Guam is equally critical.  Although the adjacent ship repair facilities were closed in 1995, the base supports four U.S. attack submarines.  Any Pacific conflict will have a distinct undersea component.  Indeed, given the PLA's missile arsenal, the U.S. may rely exclusively upon submarines to defend Taiwan in a contingency.  And PLA submarines can be expected to push into the Philippine Sea, pressuring U.S. forces even if formal hostilities between the U.S. and China have not commenced.  Thus, the four Los Angeles-class submarines deployed to Guam will be integral to any U.S. operations during a China/Taiwan conflict's opening phase.  Additionally, submarines deploying from Pearl Harbor will rely on Guam's support facilities and its two submarine tenders to re-arm during an extended fight.

Guam is a prime Chinese target.  PLA fighter aircraft can engage their U.S. counterparts in Japan and on Okinawa, preventing them from fighting over Taiwan.  But suppose a PLA missile bombardment neutralizes Guam, destroying its multipurpose airfields or submarine support facilities. In that case, it will become extremely difficult for the U.S. to reinforce its Pacific Air Forces or "surge" submarines into the East China and Philippine Seas.  And the crucial hours to days of reinforcement delays could tip the balance in the PLA's favor, allowing it to neutralize Taiwan’s offensive capability, isolate regional U.S. forces, and apply pressure to Japan or the Philippines.

As Admiral Harry Harris, former U.S. Indo-Pacific Command commander, has already articulated, the precise technological mix of capabilities used to defend Guam is a secondary question.  The primary issue is Guam's insufficient defenses.  Once again, the 36th Wing lacks fighter aircraft, while the only permanently deployed missile defenses are THAAD anti-ballistic missile batteries, which will not defend against China’s hypersonic and air-breathing cruise missiles.

The U.S. military's current approach is to deploy AEGIS Ashore, a modified version of the U.S. Navy's AEGIS combat system, to Guam to bolster its air defenses, using AEGIS data to direct SM-3 and SM-6 launchers.  This is a reasonable first step.  But it is insufficient.  AEGIS Ashore is a ballistic missile defense system.  Like its counterpart in Romania, it will not cover the variety of cruise missiles with which the PLA would bombard Guam.  A more reasonable approach would integrate AEGIS sensors with other open-architecture systems, using a single command and control system rather than the stove-piped approach that links specific sensors to specific missiles.

Increasing funding for missile defense technology is a necessary policy step given the realities of the Western Pacific military balance.  But coherent strategy must inform any funding choice.  Guam is central to any U.S. strategy in the Western Pacific.  Leaving it exposed creates a critical weakness upon which the PLA will capitalize.

Seth Cropsey is a Senior Fellow at Hudson Institute and director of Hudson’s Center for American Seapower. He served as a naval officer and as deputy Undersecretary of the Navy. Harry Halem is a research assistant at Hudson and a graduate student at the London School of Economics.