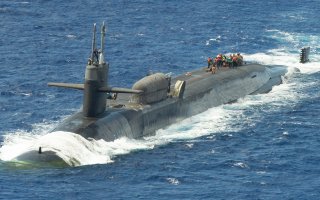 The ship is most likely a SWATH design, or Small Waterplane-Area Twin Hull. The twin-hull design is both very stable, even at high speeds or in rough seas, and is also known for being very quiet, a useful quality to have for a ship intended to use sonar and other acoustic listening devices to detect submarines.

The Chinese design is likely broadly similar to American SWATH designs, which are noted for having long-range and high endurance.

SWATH-type ships track submarines by trailing towed sonar devices behind them on long spools of cable, and can actively detect submarines by shooting “pings” into the ocean and listening to the bounce-back for submarines hiding in the deep.

Japan's Maritime Self-Defense Forces operate SWATH ships as well, known as the Hibiki-class, with the third of the class just recently entering service.

The Cold War-era class’ operating costs are reportedly split between the United States and Japan, and the data swept up by the Japanese ships is shared with Washington as well. This gives the United States in effect more ears in the water at a lower cost.

One of the United States’ ocean surveillance ships made headlines in the late 2000s when it was repeatedly harassed by both Chinese ships and aircraft during a submarine observation mission in the South China Sea. Though the area the ship had been operating in is widely recognized as international waters, China claims sovereignty to wide swaths of the South China Sea and insisted it was defending waters within its exclusive economic zone.

The People’s Liberation Army Navy has a history of dropping in on American Navy ships and aircraft. During a 2014 U.S.-led multinational naval exercise, the PLAN quietly slipped an electronic surveillance ship near the USS Ronald Regan aircraft carrier and its carrier strike group, presumably to scoop up electronic data.

Despite the threat of detection posed by ocean surveillance ships, submarines in American naval service are progressing. Construction has already begun on the new nuclear-powered Columbia-class ballistic submarines, which are slated to enter service in the early 2030s. Thanks to a new electric drive design, the Columbias are anticipated to be the quietest submarines ever built for the U.S. Navy.

One of the United States’ primary advantages over other countries like China is the U.S. Navy’s advanced and hard-to-detect submarine assets, which could be used to restrict Chinese surface vessel movement in the event of a conflict. This new ocean surveillance ship indicates that China is putting real effort into offsetting or eliminating that advantage, in the event that a conflict with the United States would break out.