China Has a New (Old) Strategy to Push the U.S. Navy Out of the South China Sea 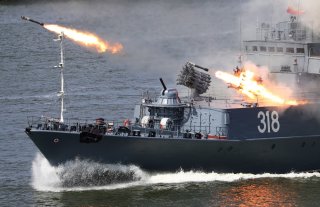 Here's What You Need To Remember: As a “happy ending” to this Chinese rendering of a late Cold War at sea incident, the analysis observes that no other similar conflicts followed after this bumping incident. In fact, the incident is even described as “not a negative event for either side,” and perhaps even a “双赢的结果” [win-win result], because it was said to help both navies reach a common perspective with related guidelines for such sensitive interactions at sea.

The “sail by” of USS Lassen within the 12 nautical mile claim line of the new Chinese facilities on Subi reef in the South China Sea occurred without major incident several years back. Despite some fiery Chinese rhetoric, war has not broken out and that is a profoundly good thing. Actually, nothing much has changed at all, so it seems. The tense stalemate persists as before. China will continue to build up its new “bases” in and among the Spratly islets. The U.S. will continue to patrol regularly and exercise with its alliance partners. Perhaps, as Xi Jinping said not so long ago, the Pacific Ocean really is big enough to accommodate the interests of both China and the U.S.?

Editor’s Note: The following is part of a unique series we call Dragon Eye, which seeks insight and analysis from Chinese writings on world affairs. You can find all previous articles in the series here. This article appeared several years ago and is being reposted due to reader interest.