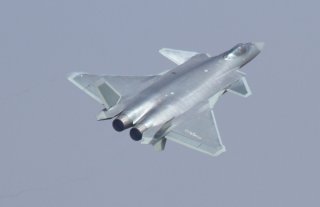 Here's What You Need To Remember: The predominant theory in western circles is that beefy J-20 is exhibiting high-speed but inferior maneuverability, making it best suited for hit-and-run style attacks. But China’s evident sustained interest in testing agility-enhancing TVC engines may support a counternarrative that the J-20 is intended to evolve into a more well-rounded jet once upgraded with new engines, one that could more than hold its own in within-visual range combat.

This enhances the jet’s ability to adjust pitch, roll and yaw, granting the J-10B super-maneuverable flight characteristics, in which the pilot retains control of the aircraft during a stall, unlike for a conventional plane.

Russia has adopted TVC engines on a larger-scale in the fourth-generation Su-30MK, Su-35S and MiG-35 fighters, as well as its Su-57 stealth fighter. China’s purchase of 36 Su-35 fighters in 2016 likely gave it access to technology it used to inform the TVC-equipped WS-10.

The ability to perform tight maneuvers is obviously slick card for pilots to hold up their sleeve in a within-visual range dogfight, potentially allowing them to outmaneuver nearby foes and possibly dodge an incoming missile.

Or do the tests instead indicate CAIG’s focus on making thrust-vectoring J-20 stealth fighters? Dr. Andreas Rupprecht, author of the Modern Chinese Warplanes series of books, told Defense News earlier in 2019 it’s more likely that the J-10 engine testbeds are being used to test capabilities that will make their way into new WS-15 engine planned for the J-20.