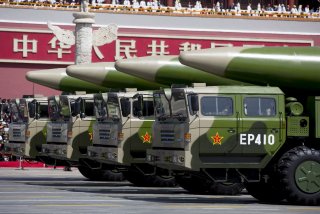 Here’s What You Need to Remember: This may be part of the reason why the Defense Department has based a range of missile defense technologies in the Pacific region, including its ballistic-missile intercepting Terminal High Altitude Area Defense. It is no surprise that the Army is sending its first cutting-edge Iron Dome missile defense technology to Guam.

Japan and Guam might be far more vulnerable to an attack from China than either country has previously realized, according to a 2021 Defense Department report titled Military and Security Developments involving the People’s Republic of China.

The People’s Liberation Army (PLA) medium-range ballistic missiles and land-attack cruise missiles (LACM) are capable of striking U.S. bases in Japan as well as key areas within the U.S. territory of Guam—possibly with land-launched Dong-Feng 26 anti-ship missile. An attack on Japan or Guam could come via land or from the ocean. Such a scenario further compounds the vulnerability of U.S. assets based at these locations given the wide range of angles, ranges and geographical locations a surface ship might be able to fire from.

“LACMs will also likely be deployable on surface platforms like the Renhai class guided-missile cruisers,” the report states.

Additionally, the risk to Japan and Guam also comes from the air. China’s Xian H-6K bomber jets, which conduct patrols in the Western Pacific, are clearly a threat to Guam. The sensors and targeting systems that China uses are increasingly empowered by over-the-horizon surveillance assets and information sharing technologies, according to the report.

“The PLA is investing in reconnaissance, surveillance, command, control, and communications systems at the strategic, operational, and tactical levels to provide high-fidelity OTH targeting information for its strike platforms,” the report states.

The stakes are high when it comes to this kind of risk, given the operational importance of the U.S. military equipment based in and operating out of Guam. This equipment list includes surveillance drones, fighter jets and bomber aircraft, which would be crucial to any kind of military engagement in the Pacific region.  In fact, a U.S.-led defensive counterattack could be almost entirely crippled this way. After all, Japan has made a multibillion-dollar investment in F-35 fighter jets, which could quickly lose their value if they are successfully targeted while on the ground by long-range Chinese weapons with launch points concealed by road-mobile ballistic missiles.

This may be part of the reason why the Defense Department has based a range of missile defense technologies in the Pacific region, including its ballistic-missile intercepting Terminal High Altitude Area Defense. It is no surprise that the Army is sending its first cutting-edge Iron Dome missile defense technology to Guam. That Iron Dome battery became operational in September of this year and the second one is slated to arrive in December, according to Army Maj. Gen. Brian Gibson, the director of the Air and Missile Defense Cross-Functional Team for Army Futures Command.