China Is Only Getting More Aggressive About the South China Sea 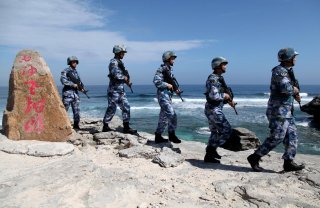 Regional flashpoints are heating up, as we’ve seen with the fatal clash in Ladakh on the India–China border, the protests in Hong Kong and provocative sorties in the airspace over Taiwan and Japan. But the South China Sea may be the most dangerous of all.

Recent developments suggest that China is making even more decisive, and potentially long-lasting, moves to override other countries’ claims in this large and strategically crucial body of water.

Concern is growing that Beijing plans to declare an air defence identification zone over the Spratly, Paracel and Pratas islands. An ADIZ is a region of airspace over land or sea in which the identification, location and control of aircraft are ‘performed by a country in the interest of its national security’. This is not a new idea, of course; China unilaterally declared an ADIZ over the East China Sea in 2003.

Such a declaration would invite much criticism from Southeast Asian claimants, and would certainly be a great worry for Taiwan and Japan. It might also catalyse long-needed unity and solidarity in the regional response to China.

Over the past few months, Beijing has intensified its activities in the South China Sea, causing increased anxiety among its Southeast Asian neighbours.

In early April, a Vietnamese fishing boat was rammed and sunk by a Chinese coast guard ship near the Paracel Islands. That occurred after Vietnam sent a diplomatic note to the United Nations protesting China’s ‘nine-dash line claims’ in late March. There has since been speculation that Vietnam—which has been among the most vocal and active nations in standing up to China in the South China Sea—will pursue international legal action as the Philippines did in 2016.

China also unilaterally declared two new administrative regions in the South China Sea, indicating its desire to devote more manpower and resources to its artificial islands, build additional infrastructure, strengthen its military presence in the area, and permanently formalise its control over disputed waters. And while maritime conflicts are high on Hanoi’s agenda as this year’s ASEAN chair, the move makes clear that China has no intention of working towards a functional dispute management mechanism through ASEAN processes.

The Philippines was also subject to China’s increasingly bold actions in the South China Sea, when a People’s Liberation Army warship readied its weapons to target a Philippine Navy ship. While Manila appears to have forged closer relations with Beijing, there are still indications that it’s prepared to protect its sovereignty. The Philippine Department of Foreign Affairs released a statement in support of Vietnam, expressing ‘deep concern’ about the sinking of the Vietnamese vessel and noting ‘how much trust in a friendship’ can be lost following such incidents. The Philippines’ reversal of its decision to withdraw from the Visiting Forces Agreement with the US and its decision to restart oil and gas exploration in the South China Sea are further promising signs of Southeast Asian resolve.

Malaysia was involved in a months-long standoff with China after a Chinese survey ship entered its  exclusive economic zone. But Malaysia’s reaction has been relatively muted, in line with its traditional preference for a low-profile approach on South China Sea issues. At the time Malaysia was also preoccupied with abrupt changes within its government.

Indonesia, which is not a claimant state and has usually kept quiet on the issue, recently sent a diplomatic letter to the UN countering Beijing’s position on the South China Sea. It declared that China’s claims had no standing under the UN Convention on the Law of the Sea and referenced the 2016 ruling of the Permanent Court of Arbitration that rejected Beijing’s claim to ‘historic rights’ in the disputed waters. This response demonstrated Indonesia’s resolve in the face of repeated Chinese incursions into its waters and its seriousness about protecting its maritime boundaries.

China’s stepped-up efforts to assert control over the South China Sea may prove counterproductive for Beijing. The shift to an explicitly offensive posture has already ramped up tensions with the US and increased the risk of miscalculation and escalation in the region. For the first time in years, the US sent three aircraft carriers to the Pacific Ocean. The timing of this show of force was no coincidence and, combined with an increase in freedom-of-navigation operations, indicates how dangerous the situation has become.

China’s relations with its Southeast Asian neighbours also stand to be damaged. Its aggressive behaviour is pushing some states closer to the US and other democratic allies in the region, and it may well prompt them to respond overtly, abandoning the hedging strategy they’ve pursued thus far.

Indeed, the intensification of China’s actions in the South China Sea and the increasing willingness of regional nations to defend against Beijing’s encroachments should motivate Southeast Asian states to act in a united and resolute way.

This article by Huong Le Thu and Alexandra Pascoe first appeared in The Strategist on July 6, 2020.