China is Striving to Deter and Defeat the U.S. Military 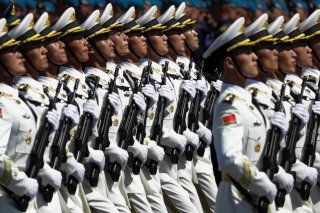 Here's What You Need To Remember: China has only recently enhanced its aerial refueling and air transport capabilities, or has flown long-range bomber over the Pacific. Until a few years ago, Beijing wasn't trying to project its power, but when it did, it started acquiring the capabilities it needed.

China's military isn't just aiming for mere parity or deterrence with the U.S., but rather military victory in a potential Sino-American war.

"The PLA [People's Liberation Army] is focused not merely on competing with the United States or other nations as a goal in and of itself, but instead on competing as a means to achieving the policy outcomes identified by the CCP [Communist Party of China] -- deterring U.S. intervention and defeating the U.S. military if the United States and China do come into open conflict," writes RAND Corp. researcher Scott Harold in a recent study.

Michael Peck is a contributing writer for the National Interest. He can be found on Twitter and Facebook. This article first appeared in December 2018.