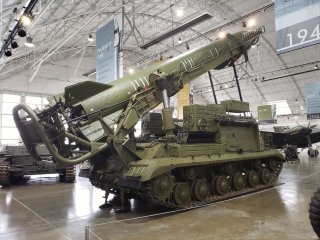 Here’s What You Need to Remember: China’s apparent return to land-based ASBM target tests is likely intended to limit the controversy and observability of tests in the open commons of the Pacific Ocean.

Photos taken by satellite imagery company Maxar on November 7, 2021, on behalf of the U.S. Naval Institute reveal that China has built an accurate mock-up of the deck (but not the island superstructure and other equipment) of a Ford-class aircraft carrier at a missile test range in the Taklamakan desert in western Xinjiang Province.

You can see the satellite imagery combined in this graphic published by Reuters.

These efforts are almost certainly so the test range can offer more realistic practice targets for China’s growing arsenal of anti-ship ballistic missiles (ASBMs). These weapons, which unlike the more widely used naval cruise loft high into space before plunging down at incredible speeds, have cast a long shadow in military competition between the U.S. and China since Beijing first unveiled its DF-21D “carrier killer” missile in 2009.

The DF-21D, which itself is mounted on a mobile truck launcher making it harder to kill preemptively, has a maximum range exceeding nine hundred miles. That means it could threaten to heavily damage or destroy powerful U.S. Navy supercarriers from well beyond the attack range of its onboard warplanes.

Since then, China has unveiled several more ASBM-type missiles: the DF-26B which may have a range of up to 2,500 miles—meaning it could sink ships at the U.S. naval base in Guam—and several shorter-range ASBM missiles seemingly intended for export (M20B, CM-401, BP-12B). China is reportedly planning to deploy ASBMs on its H-6 strategic bombers and Type 055 missile cruisers.

The mockups at the Taklamakan site are not China’s first carrier-like practice targets—a crude concrete pad had been used as a practice target at Shuangchengzi since 2003 and a mockup near the current site was targeted in missile tests in 2013.

However, the new mockups are much more detailed representations of U.S. Navy vessels. According to USNI, the current equipment was first erected and then dismantled in 2019—only to be reassembled in September 2021 per historical satellite imagery. Extensive instrumentation is visible at the new site to collect data on missile strikes, but no impact craters are visible, suggesting the site hasn’t been put to use yet for missile tests.

Why China Is Testing Anti-Ship Missiles in a Desert

Despite their formidable speed and reach, ASBMs have never been used in combat before, and there’s debate over just how reliable they would prove at hitting moving targets using their terminal infrared- or radar-guidance seekers.

U.S. carriers and destroyers typically maintain high speeds of thirty knots, and once alerted to a missile launch (the launch flash can likely be detected from space) would seek to change course and exit the kill box the missile’s seeker can scan. Thus, to be effective the seeker must either scan a broad enough area and be able to discriminate between desirable and undesirable targets, and/or it should receive midcourse targeting adjustments from friendly surveillance assets tracking the target vessel—say, a submarine, drone, or maritime patrol plane.

The first reports of Chinese tests against a carrier-like target were reported in January 2013 by Want China Times. These were supported by satellite photos showing two craters blasted into a carrier-like structure measuring 200 meters in length. It wasn’t until six years later, China finally had DF-21D and DF-26B test-fired successfully at moving maritime targets near the Paracel Islands.

China’s apparent return to land-based ASBM target tests is likely intended to limit the controversy and observability of tests in the open commons of the Pacific Ocean. In other words, the People's Liberation Army Rocket Force didn’t want the U.S. military collecting nearly as much data from its missile tests as China did.

The land-based tests may also prove less expensive or logistically complicated to orchestrate, and the smaller rail-based target may allow missile units to repeatedly practice striking a moving target. Meanwhile, a more detailed rendering of the Ford-class’s deck shape and the superstructure on the Arleigh Burke-class destroyer may also test the seeker’s ability to acquire and identify those target profiles.

On the downside, the surrounding desert environment will create different discrimination challenges for both radar and infrared seekers than a vessel would at sea, so it’s not a completely satisfactory substitute.

Furthermore, while accuracy against moving targets may be a necessity for Chinese ASBMs to be effective, is not by itself sufficient. That’s because ASBMs are highly visible both to radar and infrared sensors, and the U.S. Navy has been introducing countermeasures against the threat for over a decade, notably including SM-3 anti-ballistic missile interceptors, as well as electronic warfare and other countermeasures to disrupt missile guidance.

Skeptics of Chinese ASBMs also argue that China lacks robust enough maritime surveillance capabilities to reliably detect and track ships at sea necessary to cue missile attacks. Remember, the missile units require communication with naval, aerial, and space-based surveillance platforms to know when and where to lob their missiles. In a conflict, the U.S. forces would certainly do their utmost to disrupt or destroy the spotters and their communication links with both electronic warfare and kinetic attacks.

However, this argument is growing less convincing as China has methodically expanded and enhanced its maritime surveillance capabilities with radars deployed on a network of artificial islands, additional satellites launched into space, and new types of robotic spy submarines, surveillance drones, and maritime patrol aircraft. This map, for example, illustrates the many overlapping sensors China can deploy to track ships entering the waters between The Philippines and Vietnam.

Regardless, practice against realistic and moving target tests, and forming spotter-shooter kill chains seem like necessary prerequisites before simulating more complex tactics used in combat scenarios against a reactive enemy with air defenses, such as salvo-firing missiles to overwhelm a carrier task force’s air defense capacity.

It’s worth noting that—as far we know—China hasn’t yet gone as far as Iran in creating a floating mockup of a U.S. aircraft carrier for target practice. After taking its prescribed pounding in its second outing in July 2020, Iran’s mockup carrier capsized while returning to port. That at least won’t be a problem with China’s desert-based practice targets.