China Is Turning Pakistan into a Regional Military Power—Here's Why 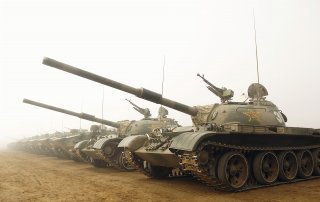 Here's What You Need To Remember: The Pakistan-China relationship makes sense: China would like an ally in the region to help balance against India while Pakistan needs a foreign supplier of weapons and weapons technology.

The Al-Khalid tank is substantially more capable than the Al-Zarrar. It was developed in tandem with China in the 1990s and is based on a Chinese prototype that eventually would become China’s impressive Type 99 main battle tank.

Like the Al-Zarra, the Al-Khalid has a 125-millimeter smoothbore gun that is compatible with Pakistani depleted uranium rounds, which gives the Al-Khalid good penetration capabilities.

The Pakistan-China relationship makes sense. China would like an ally in the region to help balance against its regional rival India, which is sandwiched between the two countries. Pakistan in turn needs a foreign supplier of weapons and weapons technology, especially as the Pakistan-United States relationship has unraveled.

This article first appeared earlier last year and is being reprinted due to reader interest.