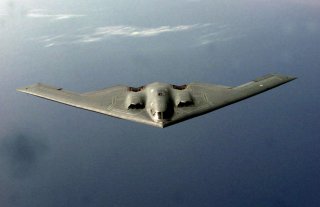 Here's What You Need To Remember: “The reality for our bomber fleet out here in the Pacific is that they will be flying really really long sorties. China’s anti-access/area-denial umbrella is significant. Their combination of cruise missiles and ballistic missiles can put all bases we have within the second island chain under risk.”

While there will always be a need for close-in attack platforms and technologies needed to engage and destroy enemy forces, there are a variety of anticipated nuances likely to further strengthen the need for the U.S. military to sustain an ability to attack from great distances. One well-established method of accomplishing this is both clear and well known: bombers.

“In Desert Storm we had access to many bases and other surrounding countries such as Saudi Arabia. Access today may be tough, so having long-range strike from bombers and bases that we control makes for a different discussion,” Lt. Gen David S. Nahom, Air Force Deputy Chief of Staff for Plans and Programs, told retired Lt. Gen. David Deptula, Dean of the Mitchell Institute for Aerospace Studies, in a recent video interview.

The point here invites little ambiguity, as regional attack options can be easily compromised if not extinguished by a lack of combat access within striking range. There are no weapons, perhaps with the potential exception of ICBMs or hypersonics, able to cross continents and attack on a single mission or attack.

Bombers, such as the combat-tested B-2, have already demonstrated an ability to do this. During the early days of Operation Enduring Freedom over Afghanistan, Air Force B-2 bombers flew from Whiteman AFB, Missouri to a small island off the coast of India, Diego Garcia, in single forty-four hour missions.

For instance, in the Pacific, regional forces such as U.S. assets in Guam and nearby allied locations, potentially face much a higher threat of enemy attack, as they are of course more vulnerable than long-range strike bombers would be.

“The reality for our bomber fleet out here in the Pacific is that they will be flying really really long sorties. China’s anti-access/area-denial umbrella is significant. Their combination of cruise missiles and ballistic missiles can put all bases we have within the second island chain under risk,” Winkler Brig. Gen. Mike Winkler, Pacific Air Force Director of Strategic Plans, Requirements and Programs, told The Mitchell Institute.

Winkler further elaborated upon this in a clear, simple respect, saying that in any kind of major engagement with China…”we would take more casualties on the ground than we would in the air.”