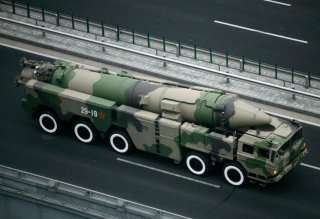 Here's What You Need to Remember: “I am reacting to what they are doing, which is significantly increasing their nuclear force with silo-based ICBMs. Several years ago they made a decision to move in the direction of a much larger ICBM force. Policies are declarations of intent, but intent can change very quickly,” Kendall said.

China’s massive and fast-paced push to add more nuclear weapons to its arsenal is fast changing the threat equation for U.S. leaders who see the country’s ongoing large-scale increase in Intercontinental Ballistic Missiles (ICBMs) as a very “destabilizing” event.

“Most of their weapons have been mobile ICBMs, so this is a very destabilizing move and I am not sure they understand the risk they are taking. Whether they intend it or not … their move creates a first-strike capability. If they continue down this path to increase their ICBM force, then that is a de facto first-strike capability,” Kendall told reporters at the Air Force Association Symposium.

Kendall may have been referring to an event described in August at the Space and Missile Defense Symposium by the Commander of U.S. Strategic Command Adm. Charles “Chaz” Richard.

“Only four months ago, commercial satellite imagery discovered what is accepted to nuclear missile fields in western China. Each has nearly 120 ICBM silos. Now these compliment and are added into what they already have,” Richard told an audience at the symposium in Huntsville, Alabama.

Sure enough, Richard's mention of Chinese ICBM silos being detected by commercial satellites is something that aligns entirely with the information referred to by Kendall.

China’s clear ambition to massively expand its nuclear arsenal is something that has been on the Pentagon’s radar for some time, as it was cited as a serious concern last year in the Pentagon’s 2020 China Military Report.

“We do believe that over the next decade, that China is likely to at least double the size of its nuclear stockpile in the course of implementing the most rapid expansion and diversification of its nuclear arsenal in its history, China’s history,” Chad Sbragia, deputy assistant secretary of defense for China, told reporters last year according to a Pentagon transcript. “An ability to double the stockpile demonstrates a move away from their historical minimum deterrence posture.”

At the moment, China is known to have an official “no first use” policy with nuclear weapons. However that position does not appear to remain the case, Kendall explained.

“I am reacting to what they are doing, which is significantly increasing their nuclear force with silo-based ICBMs. Several years ago they made a decision to move in the direction of a much larger ICBM force. Policies are declarations of intent, but intent can change very quickly,” Kendall said.

Kendall’s concern about Chinese ICBMs aligns in several respects with the Pentagon’s 2020 China Report which adds that the number of Beijing’s ICBMs capable of threatening America will likely grow to 200 in the next five years. As an element of this expansion, China is increasing its inventory of long-range land-fired DF-26 Anti-Ship missiles able to fire both conventional and nuclear missiles.

If merely a few nuclear weapons could unleash massive, unimagined devastation upon cities and even entire countries, why would any country need more than a small number of weapons in their arsenal?

In keeping with Ancient military philosopher Sun Tzu’s famous “Mass Matters” concept, Richard said, “it does not matter if your weapons are superior if you do not have enough of them.”